Notes :
(1) Route confirmation required.
(2) 66204 dead-in-tow.
(3) It was booked to change locos to a class 58 at Ipswich (58037 was rostered) but problems on the ECML forced a change, including routing via Colchester rather than Bury St Edmunds, Cambridge & ECML as planned). 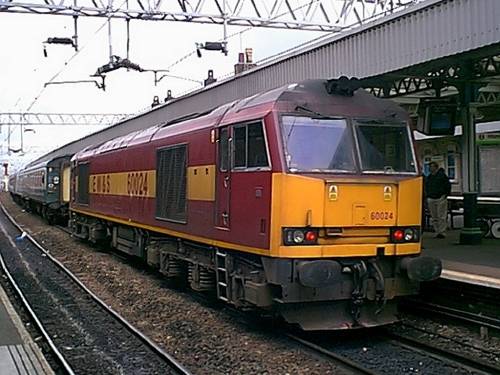 60024 goes onto the train at Nuneaton (Photo : Daniel Bound)

A bright start  to the day found a clean 92031 in EWS red sitting at Euston's platform 16. Behind it was a rather grubby and silent 66204 plus a short rake of  BR blue/grey MK1 coaches. An on time departure was made. Apparently the kettles in the old days had some sort of problem with the slight rise out of Euston, but I don't think our 92 even noticed it. Surprisingly we were routed onto the down fast and we soon settled at 75mph, the limit dictated by having a 'shed' in the formation. A brief stop at Watford preceded a typical class 92 scalded cat style acceleration. Two miles from the standing start took only 141 seconds, at which point we had achieved our cruising speed!  Checks before Bletchley preceded a switch to the slow line. Here we picked our way past various ballast trains, including one headed by 56103. Good, let's keep that thing away from any more passenger trains!

A detour via Northampton allowed a view of DRS 37608/611 at the DRIFT terminal, a glorious sight in the sunshine. Before long we were pulling into Rugby, now resembling a building site. Having destroyed the LNWR trainshed, Railtrack have now decided to fit modern style canopies which wouldn't look out of place on a TGV line. Totally inappropriate for this station in my opinion.

The 92 posed for the usual photocall and then left us. 66204 made a spirited yet thrashless departure past the numerous stabled locos including 58023 and 37667. Coventry was soon passed, and we meandered along the secondary line to Nuneaton where we arrived on time. Here we were greeted by the sight of 60024. I've been informed that this loco was the only class member yet to feature on an enthusiast's charter. Good, another scratch !. With such a light load the 60 had little to do and we trundled along to Peterborough via Leicester and Oakham. At Helpston the Railtrack signalman had pathed us directly onto the March line. Thankfully our driver at least was on the ball, and after pointing out their error we were allowed into the yard where a swift engine change was made.

Scabby grey 56131 (a winner for me) coupled up and quickly lurched over the crossovers onto the March route. Ely was reached about 20 minutes early where we ran into the down Reception loop. Here the 56 ran round and we waited. And we waited. By this time the wind had reached gale force and the flimsy overhead wires were bouncing around. Between the procession of plastic units we were entertained by a group of lads trying to play a game of football. Eventually we left the loop at the booked time only to be held for a late running unit bound for Norwich. The 56 was a strong engine, but rather quiet as grids go.  The most amazing dust storms were constantly being whipped up by the winds, an amazing sight for as far as the eye could see. After a delay at some crossing gates, a spirited run saw the tour arrive on time at 1548 at Norwich where 47737, 67020 and 024 were stabled. Plenty of time was allowed to find a good pub for food and a few beers.

We returned to the station a few minutes before the 17.08 departure time to find 67020 on the front. 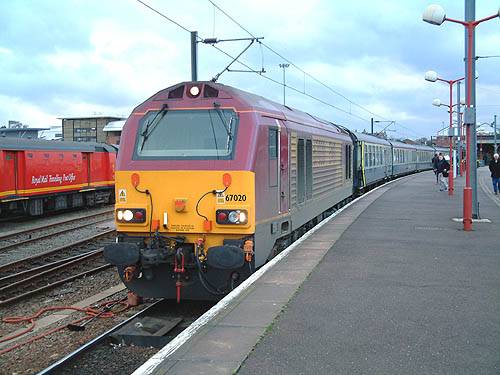 I didn't stay long to view it as the wind felt bitingly cold. We made a quick departure but before long we were caught by adverse signals. Ominously, we were then informed that the ECML was blocked by fallen wires and that anyone wishing to go North from Peterborough should alight at Stowmarket for a service train! Even more problems at Ipswich. Here we were supposed to stop and attach a 58 to take us to King's Cross via Cambridge. Clearly the plot was lost as we passed through without stopping. At Colchester we were informed the 58 was waiting, to take us via Stratford to Finsbury Park. We sat here for some time, before an announcement to board the train came. As we left 58037 was seen in the yard with a driver in it's cab. The tour proceeded rapidly down the G.E. mainline, pausing briefly at Stratford to set down before being routed onto Finsbury Park. We eventually alighted from the tour at 2030 and a quick leap onto a 317 saw us back at the cross at 2040, 10 minutes before the tour was due.

So why did we not have the advertised class 58 and so many passengers felt short changed? I doubt there is any reason to criticise the organisers or EWS. Until departure from Norwich the tour had been running well. Clearly the chaos caused by the high winds then completely threw Railtrack and it's planners and signalmen. We were told that they couldn't find a path for the light engines at Colchester due to the number of Northbound services (which begs the question why they made us continue beyond Ipswich with the 67) and that the tour would be further delayed by "over an hour"  if we insisted that the engines had to be changed at Colchester. So it seems that we lost the class 58 haulage because someone couldn't be bothered to find a solution.

A time in brackets is approximate