A Railtour run in memory of a railwayman and fellow enthusiast
who lost his life at Great Heck on 28th February 2001.

Nameplate and plaque on 66526, one of the locos used from York. 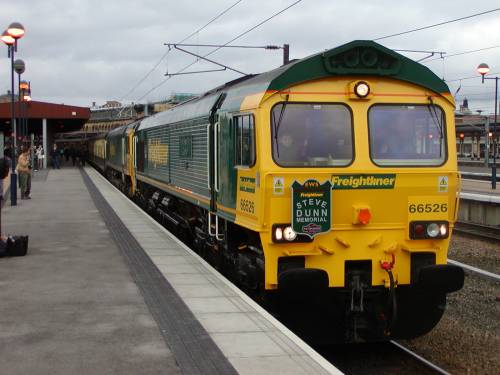 How do you write a review of a railtour that was run in memory of someone who lost his life simply doing his job? Such is the position I find myself in a couple of hours after alighting from this particular tour and I just hope this Web page is appropriate on what, for those on board that knew Steve Dunn, was undoubtedly a very sad day out. I've chosen not to make this a long review as that isn't really what is important on this particular occasion.

Steve Dunn, a driver for Freightliner, lost his life in the railway "accident" at Great Heck near Selby on 28th February 2001 when his freight train collided with a GNER express that had derailed after hitting a Land Rover and trailer that had come off the M62 motorway into its path. The tour brochure records that the idea for this railtour came from some of Freightliner drivers based in Crewe. Proceeds from the day out were being donated to the "Steve Dunn Memorial Fund".

The traction on this day was all provided by Freightliner. 57005 "Freightliner Excellence" began the day from Crewe, running via Birmingham & Leicester to Sheffield. At Sheffield 57005 handed the train over to 66601 for the run (via Leeds and Castleford) to York where there a two hour break was taken.

From York haulage was provided by 66526, the loco named in memory of Steve Dunn, and 66530. Our route was down the ECML, diverting at Hambleton North junction to run via Selby Canal junction to rejoin the ECML at Temple Hirst junction. A little further on and the train slowed and stopped at Great Heck where a two minute silence was observed.

At Doncaster the train was routed via the up west reception line (i.e. round the "back" of Belmont Yard) before heading for Gainsborough - quite rare track and required by quite a few on board I would suspect (me included!).

The pair of 66's made little fuss as we headed on our way, via the Lincoln avoider, Newark Castle and Nottingham. Back at Toton and we "lost" the 66 pairing in favour of somewhat older motive power in the shape of 47224 & 47289. With the end of freight workings for this class now not very far away this may be one of the last tours ever to use such traction. The 47's powered the train back along the reverse of the route we'd come in the morning with 57005, at least as far as Nuneaton where I left the tour to head home.

My thanks go to all the organisations and individuals involved with the running of this particular railtour, it was an excellent day out and one I think that was fitting in the circumstances.