A railtour featuring a class 52 "Western" on the mainline, a sight last experienced back in 1977! 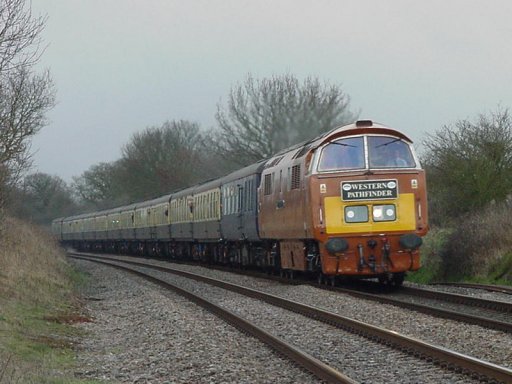 D1015 "Western Champion" is viewed from the level crossing about half a mile south of Wickwar Tunnel. (photo : Phil Pearson)

What were you doing on 26th February 1977? For some on board this Pathfinder tour the answer was simple - they were passengers aboard the BR "Western Tribute" railtour, the last public train to use a class 52 "Western" on the mainline. Fitting then that, after a lot of waiting and at least one false start, that the return to the mainline running for one of this class was to be almost exactly 25 years to the day since that farewell tour in 1977.

To get the tour stock (and passengers) down to London the train originated at Crewe and used D172 "Ixion" - though said loco is now back in BR blue and numbered as 46035. Indeed it made quite a nice sight running into Banbury with the train in the early morning sunshine.

I was hoping my seat in coach C would be towards the back of the train and was pleased to find that it was - that would put us near the front for the run to Bristol and back from Gloucester - 46's are OK, but today wasn't about that loco, it was to be all about Maybach power!!

Despite the customary stagger along the GWML, arrival into Paddington was a few minutes early. Anticipation was running high but we all had to wait for some time until finally the bright shape of D1015 "Western Champion" was seen heading in from the Old Oak Common direction. For those not aware (where have you been these last few years?) D1015 has been restored in the experimental "Golden Ochre" livery (which it carried in early service days) - a colour scheme I personally think suited the class very well.

Speaking personally I found the wait for D1015 to appear akin to those feelings experienced on 30th November 1996, the day Deltic 9000 "Royal Scots Grey" became the first Deltic to be returned to mainline running since they were withdrawn from service at the end of 1981. Maybe however in this case the feelings were even slightly stronger as we'd only waited about 15 years for that event, this time it was 25 years that had elapsed. Knowing what happened to D9000 on 30/11/96 I for one was hoping D1015's would be much less dramatic!

Being in one of the middle platforms meant D1015 was off the end of the platform so not much chance of any decent photos. Our end of the train was well filled as departure time came....

Half the worlds population of 165's and 166's seemed to have priority over our special and it was some 15 minutes after booked departure time before we finally got the road away. History was made at 12.27 as D1015 made a somewhat claggy exit from Paddington station. In our seating bay two bottles of champagne were cracked open in celebration of the event - Maybach power was now back where it belonged....on the mainline!

The run to Reading was, as anticipated, a relative stagger. I didn't really mind though as it gave a chance to savour the sound of D1015 working at low and medium speeds - sort of ELR, WSR or SVR running but on "load 11" so she was having to work a little harder. After Reading we got the chance to go beyond the top speed many of us had previously experienced with a "Western" in preservation and well worth the wait it had been. All windows were wide open and D1015 could easily be heard above the sound of the carriages - and what a superb sound too!

After Swindon we headed via Chippenham and Bath Spa to Bristol. As we exited Box Tunnel those recording the locos performance confirmed we touched 90mph - the speed for which the loco is certified. With the champagne long since finished, some beer was consumed to celebrate this achievement.

Arrival into Bristol was a couple of minutes early. All off to watch, photograph and video D1015 running round the train. It's a long time since I can recall seeing so many people in one place to witness a railtour. Many of the faces were ones I'd not seen for some time either.

Departure from Bristol was on time and, for those of us now at the back of the train, things were somewhat quieter for a while. Soon enough however we arrived at Gloucester and it was run-round time again.

The days highlight for me was the assault on Sapperton bank - it was another of those "you just had to be there" moments. I wasn't lucky enough to have had any "Westerns" for haulage in their service days but at least now I could get the experience of what it was like courtesy of the Diesel Traction Group who have spent the last few years working towards getting D1015 "mainline" again - you certainly have my thanks chaps!

The run from Swindon "home" was just as enjoyable, but I actually found myself a little sad as we'd lose D1015 at Paddington - role on 20th April and her next outing!!!

Not much to report on 46035's run northwards, we departed Paddington 25 minutes late but had basically caught this back by Reading. Arrival back at Banbury was pretty well on time and I headed off home a happy crank! My thanks go on record to all involved in D1015's restoration and the running of this railtour. Be seeing you on 20th April??