Another in the occasional series following the exploits of "preserved" traction on service trains. Silverlink have experienced many difficulties keeping a reliable service on the "Marston Vale" line between Bletchley and Bedford using first generation DMU's, often resorting to using busses in place of trains. As a stopgap to the introduction of "Sprinters", Silverlink have decided to re-introduce loco hauled trains to the line. The two coach trains employ a Fragonset railways Class 31 loco on each end of the train (to save the need to run round at Bedford or Bletchley). At the time of writing only one train of the two train diagram was in the hands of the 31's but it is planned to use peds on both trains once there is another loco available.

After a call from a friend on the Friday evening we decided to meet up at Bletchley and have a run to Bedford and back. Gen on the loco hauled services over the line was still somewhat lacking so we decided just to turn up and see what "produced". I arranged to meet Tony in time for the 10.50 departure but as I only had to travel down from Northampton, I chose to arrive in time to view the 09.50 in case that was the loco hauled diagram.

A leisurely walk to Northampton station saw me arrive in plenty of time for the 09.08 departure and gave me a chance to view 321420 in the sidings adjacent to the station. This unit, a victim of an accident at Watford in 1996, has only recently returned to service. It is rumoured that all four coaches in this unit have brand new bodyshells so, for me at least, this made it a "required sight". The 09.08 Northampton to Euston service was already in Platform 3 and was formed of units 321429/407, neither of which I required for haulage. Just before we left 86417 rolled in with Hertfordshire Railtours' "The Grand National" which was bound for Liverpool. Just time for one photo before we departed.

On the way to Bletchley we passed another northbound railtour, probably also Liverpool bound (today being the day of the "Grand National" horse race). In Bletchley yard 86424 was noted on a rake of mark 1 stock. Arriving at Bletchley and 117704 (51383/51341) was stood in Platform 5 forming the 09.50 to Bedford. 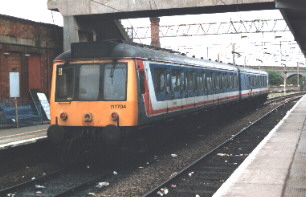 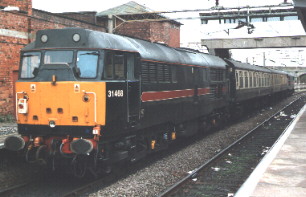 Seats were claimed in the leading coach behind 31468 and departure was bang on time at 10.50, 31468 clagging well on departure. Passing Bletchley depot another Fragonset 31 was seen (31452 I assume) and a lot of very tatty looking DMU's.

The run to Bedford (takes about 40 minutes) is a real step back in time. The line is still manually signalled and there are many level crossings, most of which have hand operated gates. With 10 intermediate stations, the journey is very much a case of thrash, brake, stop, thrash, brake, stop etc. All too soon however we rounded the curve into the "new" Bedford St. Johns station (the old station, on the long abandoned line to Sandy, was closed in 1984 when services were re-routed into Midland station). As we left St. Johns we came right back up-to-date as 66072 was waiting access to the single line with a "binliner" train for the landfill site at Stewartby. 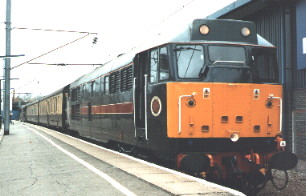 Loads of Thameslink 319's at Bedford (no surprise there) and, which was a bit of a surprise, a new platform was being built on the station avoiding line - presumably for MML services to save them having to slot in with the Thameslink services into the station. Just 14 minutes at Bedford and we were off again, this time with 31601 providing the power. An uneventful return journey (66072 noted again at Forders Sidings) soon had us back at Bletchley. 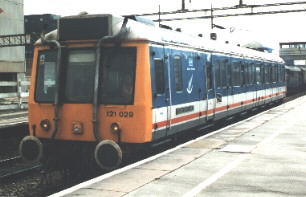 As 55029 headed round the corner to the depot 37891 appeared from the north on an overhead line maintenance train. As it ran through the station 31468 powered out heading for Bedford, still clagging well. A walk to the other end of the station and we watched 37891 backing the OHLM train into the tracks "behind" the station.

Verdict : The run from Bletchley to Bedford is a real step back in time and well worth doing, either behind the 31's or on a first generation DMU.