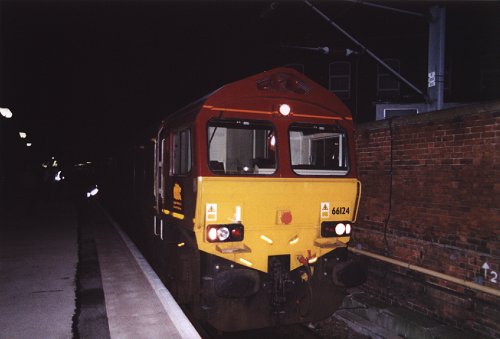 This was to be my first Hertfordshire Tour and I didn't know what to expect. Unlike the Pathfinder tours we had no idea what the traction was to be, although I knew that they used a lot of EWS 47's. The destination for this tour was to be the village of Grassington in the Yorkshire Dales. To reach the village we were going to have to leave the train at Swinden Colliery for road coaches to the Dickensian Festival.

A 9.49 departure from Peterborough meant a six o'clock wake up call, which wasn't too bad considering some of the previous rail tour experiences. We drove down to Peterborough and reached the station in plenty of time for the tour.

Gen came through the phone that D9009 "Alycidon" on the DPS tour (which I believe was one of at least 4 rail tours that day) had failed at York with the ECS up to Newcastle for the tour to Kings Cross. I was disappointed as I was looking forward to hearing the Napier's in full song on our return.

Arrival time beckoned and as the train approached Platform 5 I noticed it was the Belgian 90. So there were two 90s on the East Coast Main Line that day, 90029 being the other on the Leeds diagram. Not requiring 90028 for haulage was a bit disappointing but as the day went on it would surely get better.

Once back at full speed we then slowed down and made an unscheduled stop at Retford to allow some people off. How do people board these trains when they are totally different from what they are used to! Anything I suppose for some Class 90 bash!

Once past Retford we were soon flying through Bawtry and slowed down just after Rossington. It was the intentions to switch loco at Doncaster Decoy. We came off the main line at Lovers all Carr Junction and crept through to Decoy sidings. Here the 90 came off and went in to Platform 2 at Doncaster and was replaced by 47782 and 66124. Both were required for haulage but not for sight. The 47 came on at the front and where we were in the 2nd to last coach we had the droning of the shed coming from the Worksop end.

To Leeds we were to go via Hare Park Junction, Crofton West Junction, Calder Bridge Junction, Turners Lane Junction and round via Altofts curve to Whitehall Junction and up the Skipton line. At Wakefield Europort 66150 was seen departing with a Enterprise service, while at Engine Shed Junction 60047 was passed with a coal train heading for Scotland. We passed through Whitehall station (which was required as a station) and on to the Skipton line.

Quite a few photographers were out in force to see our train as we headed through West Yorkshire. At Skipton we were greeted by more people as we passed through the station to Skipton Middle Junction. We were soon ready for our journey along the Rylestone branch.

We departed out of Skipton Middle Junction and round the back of the station and along the Rylestone branch. The branch was very scenic as we headed in to the Dales National Park. It was quite evident that there were a number of people out to photograph the tour. Alongside the main road cars had stopped and people were out taking photos.

On the approaches to Swinden Colliery we were told to keep all windows shut, as we were to pass through the loading bunker at the colliery which had a restricted clearance. We passed through the bunker and thence alongside a full rake of Tilcon hoppers and approached the platform. This platform had been built for the festival, and we were th e first train to ever traverse the platform.

The 66 carried the train right through to the buffer stops with only two of the 13 coaches on the platform. Here we were greeted by EWS staff, Tilcon staff, the local press (I believe Radio York and the local paper) and somebody dressed in Dickensian uniform (probably the Mayor - Trowbridge revisited!!).

We all alighted and boarded the many coaches that were put on for us. At this point I shall give a brief description of what this was all about. The Town council wanted something to boost trade. Therefore they came up with the idea of having a festival and basing the village in Dickens times. It was quite clear that people from all over Yorkshire came to the festival. All the townsfolk were dressed up, and the only thing missing from making it a perfect Christmas event was the snow and a brass band.

At 15.45 we boarded the coach for Swinden and there our train was waiting to take us back to Peterborough. We departed Swinden, now in the dark to Skipton Middle Junction. Again security men were in watch as we went through the bunker. We arrived at Skipton and again we were quickly positioned for the journey to Doncaster.

We set off like a "bat out of hell" as the shed quickly accelerated. The speed on it was impressive as we travelled through the Aire Valley. Again like in the morning we approached Wortley Junction, round past Leeds (Whitehall) station and down the Castleford line to Methley Junction and round to Altofts Junction. On the approach to Doncaster the shed sounded impressive. We were booked for a loco change like in the morning at Doncaster Decoy, but were signalled in to Platform 1 to the amazement of people on board and the passengers who were waiting for the plastic turn back to Goole!! This we were told was on the grounds of safety.

The shed wandered off to Doncaster Carr and 90028 came off the bay at Platform 2 to reverse on to the train. For the first time of the day we were able to observe 47782 at the end of the train, as a 158 went out to Cleethorpes. The loco too came off and was seen heading south through platform 3.

We departed Doncaster and soon quickly picked up speed all the way to Peterborough with very little else to note.

In all an interesting trip with a interesting destination, good mix of routes, and a required 66/47 and of course the Rylestone branch.

VERDICT: Good overall trip and am looking forward to the Wensleydale in January.