The traditional pre-Christmas "spin-and-win" offering from Pathfinder Tours, this tour looked like a reasonable day out for all concerned with an interesting route and various Classes of motive power. The traction on offer was all from the freight sector and included Classes 37, 47, 56, 58, 60 & 66. In the case of the latter, it would be Pathfinders first tour to use one of these newly-imported locomotives. In fact, it would only be the third occasion a member of the class had hauled a passenger train (the first two being just two weeks earlier on Hertfordshire Railtours "Route 66" tour).

On my way to Coventry to pick up the tour first thing in the morning, the gen was still broadly the same except that it was being reported that 47284 would run light engine to Crewe and be condemned after delivering us to Stafford. 47315 & 47334 were being quoted as return traction from Birmingham. Oh yes, and the slugs were back on - 37905 apparently being re-instated for the day, just to work the tour!

As usual, I could have had a bit longer in bed - the tour was around quarter of an hour late into Coventry. As predicted, 47284 was in charge. Now came the days first challenge - I was booked in coach C. As the train rolled past I looked at the "RCS" coach labels by each door;

Hmm... A closer look showed small Pathfinder labels in the windows and so after a bit of a wander up and down I located the real coach C, which was actually the third coach G in the formation! At Birmingham International I was joined by quite a number of friends. Actually that's not strictly true as I was only joined by one friend, the rest of the group were all booked in H (five coaches away). Maybe they were trying to tell us something? We carried on to Birmingham New Street where more passengers joined and then headed out via Wolverhampton to Stafford, our last pick-up point and first loco change. Here we said goodbye to 47284 in favour of 58021 and 56116. A colourful combination with the bone in Mainline freight livery and the grid in Load-Haul colours. 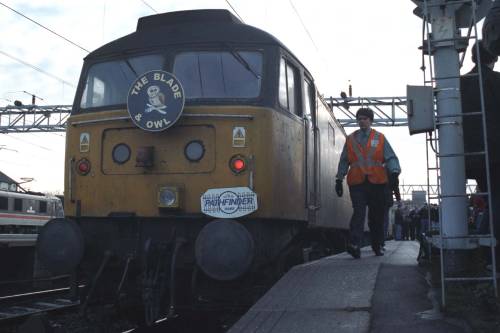 The headboard is about to come off 47284 at Stafford.

As we wended our way south to Lichfield then turned north towards Burton-on-Trent there was ample chance to get socialising with many fellow travellers. As expected, there were many familiar faces on board. Timings were very liberal and as we passed Stenson Junction and took the Castle Donnington line, we were some 20 minutes early. A wait for the road at Sheet Stores Junction soon put paid to the crazy idea of a railtour actually running early! After a brief pause at Beeston station to change crew (not very often a booked stop for a railtour!) we carried on our way via Lenton South and North Junctions. Originally it had been planned to run via Newstead and Mansfield but lack of a spare path forced a diversion via Trowell and Pye Bridge Junctions. Bit of a shame that, as I still need the stretch from Newstead to Kirkby Summit Junction...

Continuing through Shirebrook (where's the loco depot gone?) and Shireoaks we soon found ourselves on the run into Sheffield. Passing the tram depot we dived into the deep cutting that heralded the approach to Sheffield Midland station. As we rolled in, a shiny 66014 was noted in the centre road. As we hopped off to get some photos of the bone and grid, EWS liveried 59202 appeared heading north on a freight. I, like I suspect many others, at first assumed it was (yet) another 66! A break of almost 50 minutes here gave plenty of time to view the new immigrant from Canada. It was duly attached to the end of the train and for the next few minutes we all enacted the usual "jostling for best position" ritual at the end of the platform as we fired of a few more frames of film. 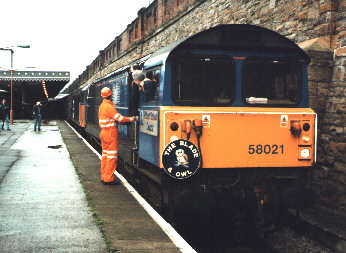 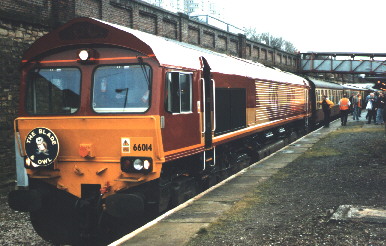 We departed Sheffield almost on time and ran to Wakefield Westgate via Rotherham Central, Moorthorpe and Hare Park Junction. We pulled up alongside Wakefield Kirkgate station on a line without a platform to change locos from the 66 to the pair of slugs. I hear this caused some anguish amongst some bashers on the platform - they were off our tour but had decided to "flag" the "cheeseburger" (66) in favour of some plastic DMU (??). I assume they did not manage to get back on board (serves them right really, at least the 66 is still a locomotive). With the 37/9's attached we set off on what was without doubt the loudest thrash part of the day. The two Ruston-engined machines were extremely vocal when the power handle is opened up. Back in the 11th coach we could still hear them as they powered up the gradients towards Hebden Bridge! After the run through Summit Tunnel (1 mile 1,125 yards long) we approached the city of Manchester. True to form, it was around this point that the days good weather (the sun had actually been out) gave way to rain. We threaded our way through Manchester and eventually (somehow around 25 minutes late) fell out the other side at Stockport. A fast run soon had us at Crewe where we said goodbye to the slugs in favour of 60012 (yawn). Watching the loco change was not so much fun as it was dark and raining (quite hard too).

An announcement was made around this time to confirm our onward loco from Birmingham International would indeed be 47334. It would however also be towing another class-mate (47314) dead as the two could not be driven together from one cab. As I required both locos this news was a bit frustrating to say the least! After a protracted stop at Brum Int there were various murmurings about both locos being worked - certainly both had their engines running when we arrived. A Pathfinder steward soon confirmed that a second driver had been found and that both locos would be powering to Coventry (after which only 47334 would be used). Hooray! Who ever organised that deserves a big thank you from those of us on board who "scored" both duffs as a result.

Arrival at Coventry, where I baled out to head for home, was around 20 minutes down (but who cares?) and indeed, the train departed for Reading with just 47334 doing the work.

Verdict : Another enjoyable day out - very sociable. In my case, scoring all 9 locos was an added bonus! 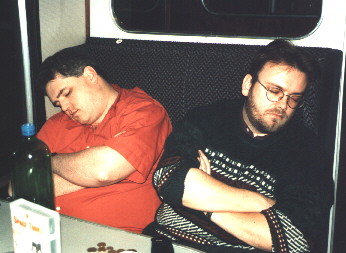 Two of "the fat boys" apparently found the excitement of a Class 66 haulage too much to take (or was it something to do with the 7 ales on offer?).