Pathfinder Tours
The Cheshire Mole
or the Magical Mystery Tour

Notes :
(1) 56114 on rear.
(2) 60038 on rear.
(3) First use of a Class 57 on a passenger train.
(4) Train reversal point at Latchford was football siding, end of line.
(5) Train reversal point at Silverdale was at the footpath underline bridge 3m 21ch.
(6) Train was re-timed to depart Chester at 17.45 though there were no return timings after Madeley Jn!
(7) W.R. (Bill) Lynch believes the train was diverted via Northampton, rather than going via Weedon as booked.

Although difficult to believe, it has been over two months since I was last on a railtour! This particular outing was attractive as it was booked to take in various rare pieces of track in the area around Crewe station without actually going through the station itself. Of particular interest to many of us was the Gresty Lane Curve which enabled passage to/from the West Coast Mainline and the Shrewsbury line, a curve only very rarely traversed by passenger trains. To keep the loco bashing fraternity happy the day featured the first ever passenger turn for the new Freightliner Class 57 diesel (christened by some as "super-spoon" reflecting that it was converted from a Class 47). The day also offered a Class 56, 60, 86/6 and 90/1.

Unfortunately I got a call on the Thursday prior to the tour from a colleague who had made the booking to let me know that the tickets had arrived...and that the Gresty Lane Curve was no longer on the tour itinerary. Apparently it was found to be in too poor a condition and Railtrack would not allow a passenger train over it. The tickets also came with a caution that beyond Crewe on the return journey there were no timings, only a "best guess". There was also some doubt over the use of 57001. Oh well...

I had the advantage of a relatively local pick-up at Coventry - good too as car parking there is free on Saturdays. I arrived about half an hour early and just in time to see 47501 "Craftsman" running through towing Class 442 Wessex-electric EMU 2418, presumably on its way to Crewe for overhaul. A quick glance at the departure screen however showed all was not well - our booked 08.10 departure was showing as delayed until 08.40, or to put it another way, I could have had another half hour in bed!

During the wait at least the station was quite busy. Fragonset 47488 (in green) passed through "light engine" and Virgin spoons 812 and 845 appeared on cross-country workings. Light engine 37255 also ran through the station off the Leamington line. An announcement was soon made to the effect that our train was delayed due to the late arrival of the stock at Watford Junction. Slack timing however soon meant that the 30 minutes delay was reduced and at 08.28 in rolled Freightliner liveried 86620 "Philip G Walton". Having decided to stand near the north end of the platform (well, I was booked into coach A which you would expect to be at the front of the train) I discovered that the train was reversed and my coach was in fact the rearmost one! 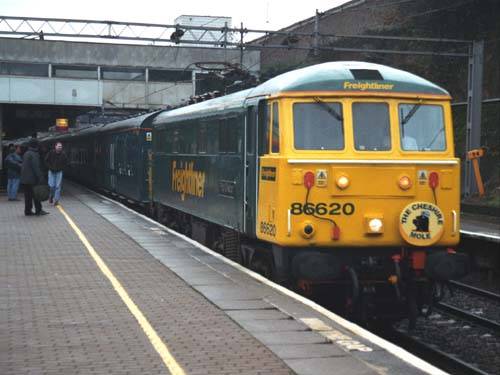 Stood at the wrong end of the platform as 86620 arrives at Coventry!

Stops were made at Birmingham International (where three colleagues joined me), Birmingham New Street and Sandwell & Dudley before we reached Wolverhampton and our first booked locomotive change. Sometimes things seem to be arranged just to upset the railtour passengers - such was the stop at Wolverhampton. We were booked over one hour to change from the buzz-box to a grid and "due to station congestion" Railtrack decided the loco change would be made in the up & down goods line i.e. not at a platform, so we couldn't get off the train! To make matters worse, news soon filtered through that the grid was none other than 56114. Arrgghh!! This particular freight locomotive had already hauled two railtours in 1998 - and I like many aboard had been a passenger on both those previous tours.

Departure from Wolverhampton was a couple of minutes early and we headed off in the direction of Shrewsbury. It was soon blindingly obvious that we'd been sent on our way straight behind a stopping train as we dawdled along and had several opportunities to get much better acquainted with the scenery during the number of times we were stationary. Despite this, we still ran through Shrewsbury only 2 minutes behind schedule (confirming it was actually Railtracks plan to have us stagger along behind a stopper?). Our route now took us through Witchurch and on to Crewe. Our route did not however take us into the station - rather we curved along the back of the diesel depot and onto the "independent lines" which run alongside the station in a deep cutting. Having passed under the Chester line we emerged alongside the West Coast Main Line (WCML), joined it and headed north towards Warrington and our next appointment with a freight line, the short Latchford branch.

Once there Load Haul-liveried 60038 was attached to the rear (i.e. our end) of the train to drag us back towards our next "near miss" at Crewe. Using the "Liverpool Independent lines" we successfully avoided Crewe station again and threaded our way out of Basford Hall Yard (on the "up through siding"). A short sprint (hmmm, slow stagger actually) brought us to Madeley Junction where we curved off in order to traverse the four mile branch to Silverdale Colliery.

Now began the days first real farce. To get to Silverdale involves a reversal at Madeley Chord Junction. Beyond the junction is about half a mile of the former line to Market Drayton. After about 10 minutes wait we set off again - no, not for Silverdale but rather up the 1/2 mile "headshunt" towards Market Drayton! With the need to clip facing points (and only seeming to have one point clip) the whole operation dragged on and on such that [boring bit snipped out] by the time we got to Silverdale and back we were running over half an hour late.

Skirmish number 3 with Crewe was just as successful as the previous attempts - use of the down Manchester Independent line got us past the station again and on our way to Sandbach. As we ran through Basford Hall Yard we passed 57001 which was ticking over - so it was looking good that we might get this loco after all (during the day the rumour machine was in top gear and predicting we wouldn't be getting it). A run along the Middlewich line (yawn) with a left turn at the end had us running towards Chester and, at long last, a chance to escape the train for a leg-stretch! As it was about 5pm already it was of course dark so the time at Chester was spent looking for a suitable eatery.

I walked back onto the station (armed with a doner kebab) to the sound of a very strange diesel engine. Sure enough, at the head of our train was a gleaming 57001. How do you describe it's sound? Well, it's a bit of a cross between a 56 and 59 with some CIE Class 201 and SNCB Class 62 thrown in for good measure! Certainly unlike any "traditional" British diesel traction. We left Chester just before 6pm and our coach (at the front) soon cooled down as all the windows were fully opened so we could hear the 57 at work. As we approached Crewe we took the up Chester Independent line thus we again avoided passing through the station. Soon however we stopped at a green signal alongside Salop Goods Junction Signalbox. Now stopping at a green signal is not normally good news and this was looking like being no exception. Apparently no guard had been rostered and we only got as far as Crewe thanks to a North West Trains guard being available at Chester. Whatever negotiations took place we eventually set off (now just shy of an hour late) on our way home. Using the up Independent we threaded our way through Basford Hall Yard and back out onto the WCML. The run to Stafford gave the "super-spoon" a chance to work and in our coach the heating did its best to stop us from freezing as all the windows were still wide open. On this stretch we got treated to glimpses of quite a few fireworks displays as it appeared most communities were holding their shows on this evening rather than 5th November.

At Stafford we said goodbye to the 57 just as 47812 spluttered away from an adjacent platform. The different engine notes were very obvious. Come on Virgin Trains, do yourself a favour and get some of your spoons re-engined. Our motive power home was now 90143 so progress was pretty swift. As for timings, no-one knew any more how we were doing - after leaving Crewe all the timing sheet said was "timings not known"! We seemed to be doing well (hmm, fatal to say that). We set down passengers at Wolverhampton and with a green signal seemed ready to be on our way. Then the signal went back to red. Guess what? The driver didn't know the route to Birmingham and EWS had not rostered a pilotman. Eventually we got the road again and off we set towards Birmingham New Street. Arrival back at Coventry was at 20.54 against the "guessed" 20.30 so all in all, maybe not so late.