Source : Gary Thornton (There for every last mile of both tours!)

To celebrate 25 years of organising railtours, Pathfinder laid on a tour (The Birthday Bash) that was claimed to have something for everyone. This included lots of changes of locomotive (some quite unusual) and a route covering some scenic lines and a few relatively rare pieces of track. Starting from Birmingham at a somewhat unsociable 04.14, an add-on tour was also arranged to get people to and from the London area. This "mini-tour" also featured a pair of Class 73 ED's on the branches to St. Albans Abbey and Redditch plus the thrash up and down the WCML from Watford.

Getting organised for this day proved a little more of a challenge than normal - in my case it involved having a colleague pick me up as he passed Northampton on the M1 motorway en-route from Thirsk to Watford (Ian, thanks again for the lift!). Time for a Chinese meal before leaving Northampton, but we still arrived at Watford Junction with plenty of time to spare (alright, so my estimate of the journey time was a little generous!). After a debate about how to pay a non-existent parking attendant to park our car (anyone else reading this who was also parked at Watford will understand what I mean), we wandered on to the station to see a whole load of freight workings pass through, headed by 47's, 86's or 90's.

By midnight Watford Junction station was packed with both "normal" passengers along with a not inconsiderable number of railtourers. An announcement was made to the effect that our tour would leave from platform 11. We all wandered over to the said platform, though being very short it meant most of us ended up queuing on the path leading to the platform. Departure time soon came and went with no sign of the tour train's arrival. Eventually news drifted back to us that there was a problem getting the two ED's to talk to each other and, as a result, it was left to one of them to get the train to Watford. It's at times like these that I do sometimes question why I do so many railtours! Around 1am the train arrived behind 73128 and 73131, with 47245 bringing up the rear. Loading the train through just three coaches took quite a while and by the time we were all on board the problem with the ED's had been sorted.

We departed for St. Albans Abbey round an hour down. At the back of the train we never saw St. Albans Abbey station as it too has a short platform. On arrival back at Watford (now nearly 2 o'clock) it was announced that we would all now have to get off and walk over to platform 8. Reason? The train was to be reversed in the yard and no-one was on hand to clip the facing points! The one bit of track I wanted on the tour (from platform to mainline) and I didn't get it!! Once the train was at platform 8, the 47 was decoupled as we had no further use for it (although maybe it could have sped things up if we had had it pushing the ED's along the WCML...).

We were back aboard and on our way at 02.15 for what turned out to be a long, quite slow journey to Birmingham. For comfort, myself and colleagues had chosen to book in first class as it only cost an extra £7.50 and what a good decision that proved to be. As we left Watford one of the stewards came round and turned out the coach lights in favour of the table lamps. These also had individual switches in each bay, so we were soon totally in the dark as everyone in the coach turned their lamps off to get some sleep. I recall passing Hanslope Junction then my next memory was as we pulled in to Rugby station to let a freightliner past (headed by 47204 & 47301). Arrival at New Street station was at 04.29, just over half an hour behind schedule.

Whilst in the platform, 58030 was added to the back of the train. As we set off we were now technically on our second railtour of the day! The run to Redditch was not too eventful although it was surprising just how many people were out photographing us as we passed through stations en-route. 58030 now took over for the run back to New Street and on to Wolverhampton via Aston and Bescot. Just after Bescot the roar of a passing light engine was instantly recognisable as being that of a Deltic - D9000 on its way to New Street to form the 06.58 Virgin XC to Ramsgate. On arrival we were all turfed off the train to allow it to go to Oxley for cleaning and refilling the water tanks. What most of us thought to this move at 06.30 is left to your imagination - I am too polite to go into print! Oh yes, I forgot to mention, it was raining too... 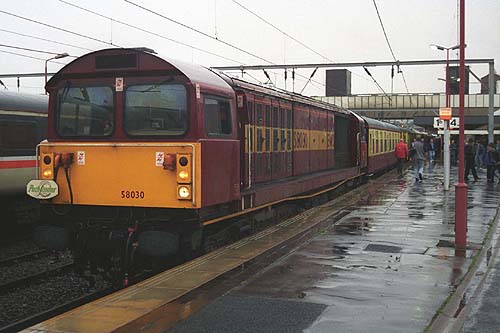 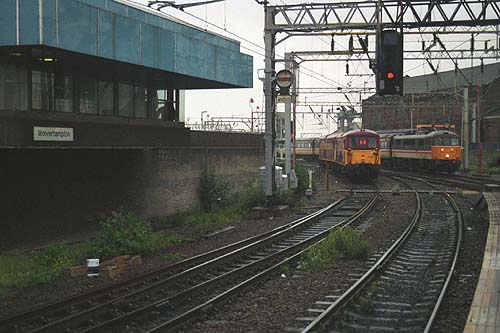 The 73's, after removal from the train at Wolverhampton (photo: Gary Thornton)

07.55 and 58030 (now on our end of the train) appeared and right on time we set off back to New Street. This time the route was via Dudley Port, Soho, Perry Bar South Jn and Aston. With more passengers on board (who looked distinctly more perky than most of us that had, by now, been on the train some 8 hours) we headed on our way to Leicester taking the route through Selly Oak, the Lifford curve, past Saltley depot and Nuneaton. Just short of Leicester station we stopped and 58030 was released in favour of 60025. We romped on towards Nottingham where we then headed towards Grantham. We were platformed there to allow our next locomotive change. 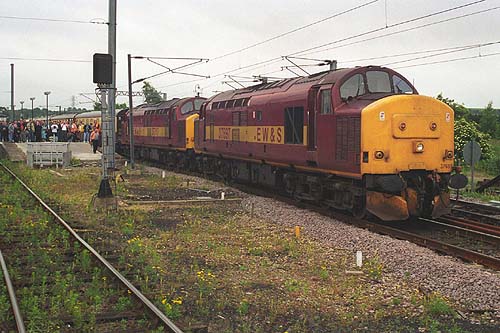 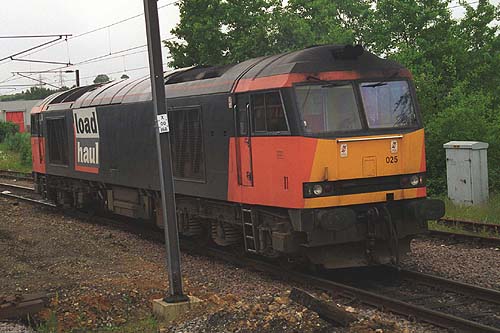 Tour locomotives number's 5 and 6 were 37697 and 37717. Our run along the ECML to Retford was, as expected, quite a lively affair. We were pathed in to the loop at Claypole to let a Class 91 past. Just as we entered the loop 89001 went past in the opposite direction. At Retford we turned off the ECML and headed for Sheffield, passing through Worksop on the way. Sheffield was billed as the lunch stop, though as it was drizzling heavily and I was nodding off, I chose to get some shut-eye whilst my colleagues went off exploring. Whilst I slept, the tractors were removed and 56065 took over at the head of the train. 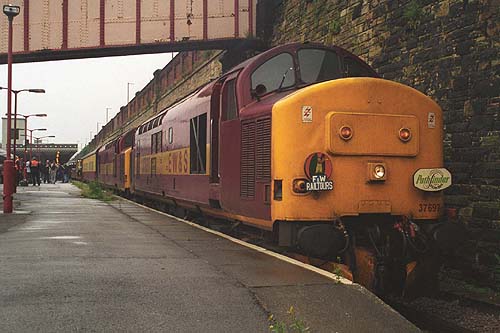 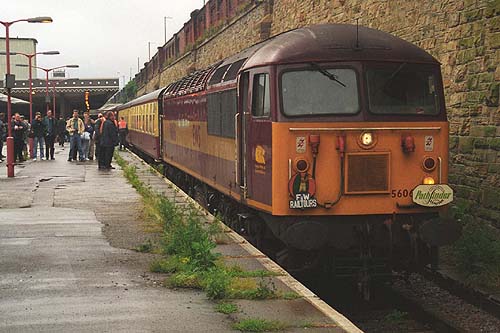 The route to Warrington (next scheduled loco change) was definitely for the scenery lovers as we went via Dore, Edale and Chinley to Manchester. Our course through Manchester (where, by the way, it was raining) was from New Mills via Romiley, Ashburys, Miles Platting and Victoria station to Eccles. Beyond there we carried on to Earlestown and then branched off onto the WCML for the short run to Warrington. Here 60065 was waiting and, after a short delay, we set off again. 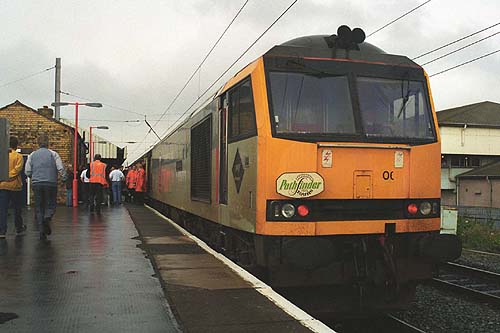 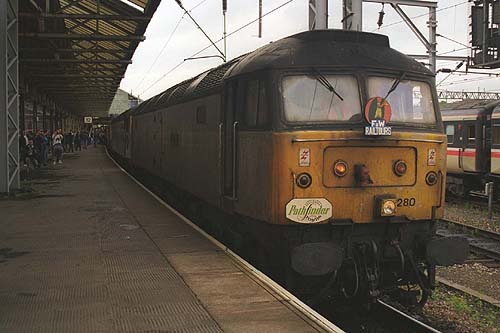 In case you are wondering, we have now reached tea-time as departure time from Crewe at 18.10 was bang on-time. So for some of us it was now almost 18 hours since we had joined the tour(s). The clag coming from the 47's suggested their internal mechanical condition was on a par with their filthy external condition. That said, they did motor a bit as we ran on towards Bescot. Along this stretch I was taking some stick about the amount of food I still had left, most of my colleagues having by now almost run out. As I said to them, no matter how close you are to completing a railtour, there is always a chance things can go horribly wrong....

Our final loco change was from the 47's back to the ED's. After about 20 minutes where nothing much seemed to be happening, word filtered through to our coach that we had a "little problem". Err, like what? Um, like 73131 has just derailed in the yard at Bescot! Right chaps, it looks like we'll be here some time. At this point I was accused of being a jinx on the tour following my earlier comments disasters befalling tours at a late hour. I of course deny having any influence over such disasters. The fact that I have been on many that went pear-shaped late in the day, I maintain it's just coincidence that I was on board! Now here I think all on board would agree that EWS (etc) did a superb job and soon a plan of attack had been formulated. Firstly, nearby 58028 was used to drag us back towards Bescot station (certainly an unexpected haulage) then 37675 was called upon to partner the remaining 73 (128) to get us home.

There were certainly a lot of smiles about, despite the delay caused. We continued our journey at 20.44 only a little over one hour down. Although both locomotives were working, the 73 (leading) was not heard at all over the sound of the tractor! At Birmingham we resorted to our first railtour name and headed home via Nuneaton and, due to the delay, the Northampton loop as an engineers possession had been taken on the mainline. Without doubt, for me at any rate, the thrash home with the 37/73 combo was the days highlight. A majority of the time we were bowling along at an extremely respectable lick. Finally, at a tad after 23.35, a trainload of tired but (mostly) happy punters was deposited at Watford Junction station.

Verdict : Simply a superb tour! If you weren't there, you really missed a "good 'un".

Note : Table adjusted for diversion via Northampton on return leg.

The following performance log was provided by Andy Flowers for the return journey between Nuneaton and Watford;

At this point, 73131 became derailed prior to coupling up on our train and as a result 37675 was substituted. In order to attach this and 73128 on our stock it was necessary to set our train back approximately 1/2 a mile. This was achieved using 58028.