Notes :
(1) David Miller comments: this trip did not go according to plan. The crew needed a pilot man to take the train from Stockport to Stalybridge and he did not materialise. We had to wait at Stockport for an hour until someone turned up. There was an optional extra of a coach from Malton to Pickering and a trip on the North Yorkshire Moors Railway. Luckily, one of our organisers had a mobile phone with him (not so common in those days) and was able to warn the NYMR that we would be late. There was relief at their end because a lineside fire had disrupted their services and everything was running late too. On the return run, our driver, a York man, was due to be relieved at Stalybridge but his relief had been sent to Guide Bridge in error. An NWT driver had been sent to Stalybridge but he did not know class 47s. Eventually the York man was persuaded to continue to Guide Bridge to solve the problem. 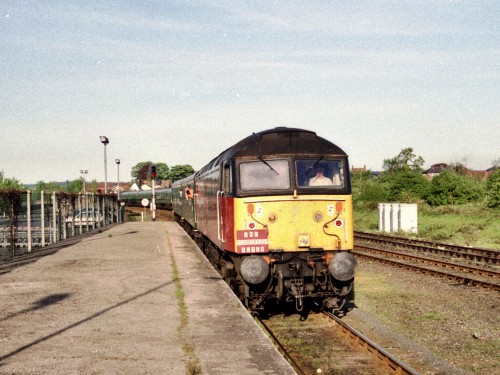 47776 arriving at Malton on the return leg (photo: David Miller)

Source : David Miller (joined/left the train at Cuddington/Malton [both ways])