I was attracted to this tour by the prospect of travelling over the 4.5 mile Heathfield freight branch from Newton Abbot, a line I had not previously traversed. To make the day a little more interesting we were also booked to travel along the somewhat longer freight line from Crediton to Meldon Quarry.

The tour did however prevent me with a few small problems, not least the nearest pick-up point being Exeter - I live in Northampton! So, even though the scheduled departure time from Exeter was a very late 1135, I was still up at around 5am to get there! I chose to drive to Bristol Parkway (110 miles) where I had arranged to meet a friend who was also booked on the trip. We had two sensible choices of train to get us to Exeter, one at 0805 (arrive 0948) and the other at 1020 (arrive 1120), both these services being operated by Virgin XC. Now previous experience of such services left me dubious about trusting a 15 minute connection, hence the early start. At least the first train was 47 hauled rather than being an HST.

As we stood on that cold dark platform at Bristol Parkway waiting our train, thoughts went back to our two previous journeys to Exeter this year - the first was behind Deltic D9000 in August and the second with 50031 at the start of November. Todays run with Virgin promised little better than a long-range 47/4! Just as our train was announced however we looked up to see a class 56 appear....it couldn't be, could it? Unfortunately we soon saw the rake of tankers behind it and 56052 "The Cardiff Rod Mill" trundled through on its way to wherever.

A couple of minutes later and the unmistakable shape of a class 47 appeared from under the bridge. But wait, what's that I see on the cab front? Looks like push-pull cables....and it is rather a dark body colour.....ah, me thinks.....former Scottish region class 47/7 in Fragonset Railway colours? Sure enough, in rolled 47712 at the head of our train! Not a required haulage, but at least a little different from the usual 478xx on offer. With around 15 minutes booked stop I even managed a few photographs whilst at Temple Meads station. With nearly two hours to kill in Exeter we decided to walk up to the city centre and have a look around. Yawn! Sorry Exeter, but I didn't think much to your shops!

Back to St. Davids station and our tour arrived from Plymouth at about 1120, formed of an HST set all in Great Western Trains colours. Time to walk to both ends for the power cars (43004 and 43192) and a chat with some of the stewards before it was time to go. For those already on board it was a case of back from whence they came as the train retraced its route about 20 miles to Newton Abbot. We arrived in Platform 3 where we would have to reverse again to gain access to the Heathfield branch.

This branch is all that is left of the original route from Newton Abbot to Moretonhampstead. It has seen very little traffic in recent times, although EWS are apparently planning to reintroduce oil traffic on the branch again. The tour was advertised to cover the entire branch, but soon after Heathfield station and still about a quarter of a mile short of the end of the line, we stopped. A few minutes later and we continued on our way, soon reaching the end of the line. The reason for the first stop? Apparently a small tree had fallen onto the line...so the driver got out to remove it! During the few minutes stop at the end of the line my friend was queuing for a coffee when the pay phone in the buffet started to ring. One of the catering staff answered it - to find out it was GWT control at Swindon wanting to know if we had reached Heathfield yet!

On the way back to Newton Abbot we stopped for a few minutes at the former Heathfield station where we were allowed off the train. Once back at Newton Abbot it was another change of direction as we headed back to Exeter and the Barnstaple branch. We did not get too far though as we were pathed in at Dawlish Warren to allow another HST to pass. We arrived at Exeter again and were stopped for a couple of minutes until the HST ahead of us had left. We then headed off for Crediton and on to former Southern railway metals. On the way to Meldon Quarry we passed through Okehampton station which has recently been restored and now has a Sundays only passenger service in the summer months.

At Meldon Quarry we were brought into the arrival siding. Not too much to see except the quarry shunter - a rather natty blue-coloured 0-4-0 named "Flying Falcon". Departure from Meldon was a little ahead of schedule and once back to Okehampton we stopped for a break of nearly one hour. We were even greeted by the Mayor and a few other civic dignitaries! We left a little before 4pm and pretty soon we arrived at Exeter St. Davids where we got off. To get back to Bristol Parkway we used the 1654 HST service to Leeds - formed of two appropriately named power cars for the trains destination, "South Yorkshire Metropolitan County" and "West Yorkshire Metropolitan County"!

An uneventful journey followed and by around 1810 we were back at cold, windy Bristol Parkway station. Now heading back to our respective homes was not on the menu as both my colleague and myself were due to have a Christmas meal at "The Bird in Hand" public house in Stourport-on-Severn that evening with 21 others! A quick run up the M5 ensued and, as the traffic was light, we made it with plenty of time to spare. I eventually made it home a round half past midnight, well stuffed with Turkey and Christmas Pudding!

Verdict - a different tour, but still quite enjoyable. Having the 47/7 on the outward journey to Exeter added to the day, as did discovering that I needed one of the HST power cars (43192) for haulage. It's always good to mark-off another piece of freight track in the atlas too! 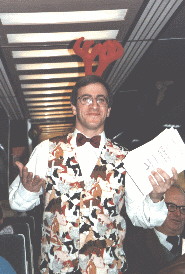 Ian Kapur of Hertfordshire Rail Tours gets into the Christmas spirit!