Hertfordshire Rail Tours
The Sally Forth

Question - what goes bleep-bleep, bleep-bleep, thump, thump, then continues going bleep-bleep for another 30 seconds before silence descends? Answer - my alarm clock at 4.30am as I managed to knock it under the bed then be unable to find it, despite its incessant bleeping! Saturday, ridiculously early hour - must be a railtour! This weeks offering was a freight line bash to Scotland taking in three branches near Edinburgh with a straight out-and-back run on the East Coast Main Line. Motive power was not too exiting with an ac electric to Edinburgh and a pair of 37/4's (top and tail) over the branches.

Around 90 minutes after my disagreement with the alarm clock and I was stood on a rather chilly platform at Potters Bar as EWS liveried 86426 rolled in on time with the tour. The run north was not exactly exciting - I'm not even sure that the buzz-box got anywhere near the speed achieved by a certain diesel on a railtour seven days before (if you don't know about that then, sorry, but here is neither the time or place to elaborate).

An unscheduled stop at Doncaster (crew change) put us a few minutes down but by Newcastle we were back on time. Arrival at Edinburgh was on time where we were to give up the electric for two class 37's, one on each end. Simple task? well, not if handled by railway employees it seems....

I walked up to the front just in time to see 86426 roll off to the platform signal which was at red - and at red it stayed, and stayed, and etc. etc. A walk to the back saw 37430 'Cwmbran' (now where's that in Scotland?) attached to the train. 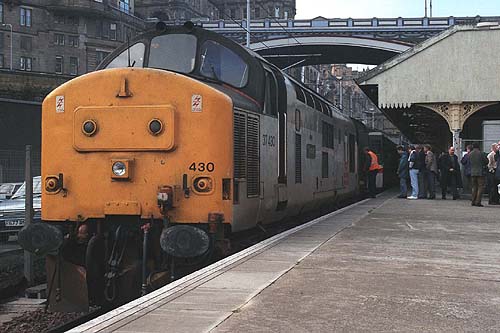 37430 shortly after hooking on to the back of the train (photo: Gary Thornton)

A couple of phot's later and a walk back to the front saw....no change! Eventually the 86 vanished allowing 37401 "Mary Queen of Scots" onto the train. The reason for the farce? Two reasons apparently - firstly, no-one knew where the 86 was to be stabled, so it was left in the platform until a decision was made. The second reason concerned the electric train heating - the ETH index of the train exceeded that of a class 37/4. It took a bit of thought before someone (I believe from Hertfordshire Rail Tours) suggested splitting the ETH cable at the centre of the train and having each tractor heat half of it! Eventually one of those in charge decided this was a good idea and at 12.21, now 23 minutes late, we finally set off for Longannet, the first of the freight lines we were to visit.

As we travelled over the Forth Rail Bridge it was nice to see a lot of new paint had been applied - looks like Railtrack are making an effort on repairs at last (or just painting it to cover the rust??). We turned left at Inverkeithing and ran up to Charlestown Junction where we stopped to change direction for the run down to Longannet. This branch was very picturesque, with good views across the Forth estuary to keep the cameras busy. We stopped adjacent to Longannet signal box, as far as Railtrack would allow us to go. The journey back was quite an adventure, a steep climb saw the leading tractor (401) struggle and so the rear one was called upon to shove a bit. I was glad I didn't have a beer on the go at the time as all the slipping and shoving made for a very rough ride!

Back at the Junction and it was another change of direction as we headed back to Inverkeithing and down the quite steep drop to Rosyth Royal Dockyard. All cameras were put away - a condition of the MOD in allowing us into the dockyard was that no photographs were to be taken. It was a price worth paying - we ran right through the dockyard to within around 70 yards of the lines end - we couldn't go any further as there was an inspection pit which could not take locomotives over it. Reversing direction again and we were soon going back through Inverkeithing station to the sidings just round the corner on the Dunfermline line. A bit of a wait here for a new crew - also a security scare at Edinburgh meant some delays to services so Railtrack preferred to keep us out of harms way.

Soon enough and we were under way again and passing through Inverkeithing again (some passengers on the station were beginning to wonder what was going on - this was the fourth time we'd been through!). Our return route took us back over the Forth Rail Bridge and around the Edinburgh suburban line to Portobello Junction and then onto the Powderhall branch. Not too exiting this one and all too soon we were back at Portobello Junction for our last reversal and the short run back to Waverley station.

As we pulled into the excursion platforms we were confronted by the platforms absolutely wedged with people - a train load of Sri Lankans who had come to Edinburgh (from London...) to take part in a protest of some sort. As our tractors were being disposed of we saw the stock for the other charter appear, headed by 86430 - cries of anguish from some of our tour participants as they would rather have had this buzz-box than 426 which we had. With 86426 firmly back on our train, we departed Waverley for London, about 20 minutes down. 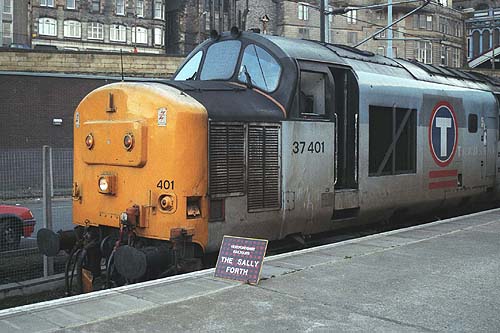 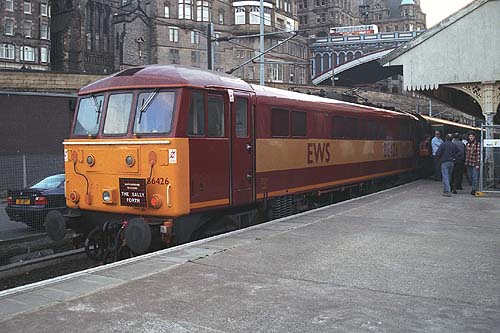 The run back was what I would call a typical return railtour run - as soon as we seemed to be gaining back some time we would suddenly slow down, or be looped to allow another train past. By York we were about 40 down and, although not booked to stop at Doncaster, we did (crew change again!). Whilst there we spotted "Thunderbird" 47741 being kicked into life. We were all speculating on what had failed when we found out that it was 86430 on the "Tamil Tiger" special (as a certain member of HRT had christened it). Some people have all the luck (not that 741 was required you'll understand, I just prefer diesel traction to electric).

Arrival back at Potters Bar was at 22.29 instead of the booked 21.51 and I shot back to my car for a quick getaway - only to discover that the condensation on the windows was rather frozen. And do you think I had a scraper handy? Guess! By the time the car park had emptied my car heater had just about done its job and I could see where I was going. I got home about 23.45, or put it another way, about 17 hours after I had left in the morning!

Verdict - not a bad tour as I needed the three branches covered and, as it turned out, also needed both tractors for haulage. Mind you, shame we couldn't have used D9000 for the ECML bash - now that would have been something else....

All distances, in miles and chains (M & C), are taken from the tour booklet. No attempt has been made to verify the mileages given. On the run to Longannet, reversal was made at Dunfermline station, not Charlestown Junction as shown in tour booklet (both ways). Additional mileage of 1m 28c to be added to total.