It hardly seems like six weeks since "The Deltic Scotsman", my last trip behind D9000, over the whole ECML route to Edinburgh and beyond with a mini-tour around the Fife circle. How would this trip, over the southern part of the East Coast Main Line then via Leeds and the Pennines to Liverpool Lime Street compare?

Departure from Kings Cross was a quite reasonable 08.03, but though the stock was already in when I arrived just before 7am, D9000 had not appeared and by around 07.50 the natives were beginning to get restless. Murmurings also started when 47725 in the bay adjacent to platform 1 started up and moved off into Gasworks Tunnel - would this be the "Trans-Pennine Duff" railtour some were asking! Had D9000 made it back from the previous days outing to Bradford, asked others.

Time to find my seat - coach L (first coach) and it was a pleasant surprise to find it was first class, so it would be a more comfortable journey than usual. Shortly before eight and our worries were over as RSG appeared out of Gasworks tunnel, but shot straight into an unoccupied platform! Just time for comments about having the 47 "inside" providing assistance before RSG returned to the gloom of the tunnel then backed onto our train. Lack of guard (or rather, no-one could find him, he was apparently already aboard) meant that departure was not until 08.18, 15 down.

A storming run out of London saw us catch up time at every timing point and by the approach to Fletton Junction we were only one minute behind schedule. I have to say this run was probably the best I have experienced behind RSG since her return to the mainline. We were stopped just short of Peterborough station to allow a class 91 past and our arrival was just three down. More sustained high speed running soon brought us to the next pick-up point at Doncaster and soon we were on our way again. At Hambleton South junction we took the curve to the Leeds line and the speed dropped to a more mundane level as we were now in "multiple unit" territory.

A trip down to the sales stand in search of a bottle or two of the "Prototype" bitter (with special labels for the day put on by the DPS) soon showed just how cold our coach was compared to the rest of the train - mind you with every window open as far as it would go I guess it was no surprise! The Pennine run was magnificent with RSG working to the line speed limit whenever the opportunity was there to do so. Arrival at Liverpool Lime Street was bang on time. 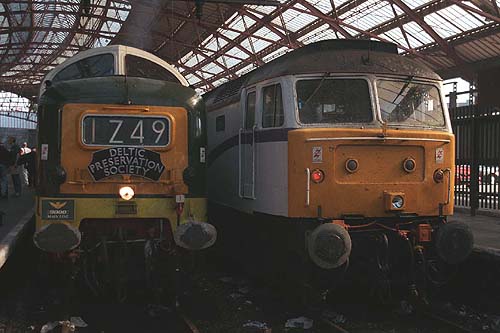 D9000 and one of the Porterbrook Leasing-liveried class 47's. at Limne Street
(photo: Gary Thornton)

The stock was removed and RSG dropped into the stabling track in the main part of the station, now complete with a "Trans-Pennine Deltic Lament" headboard. 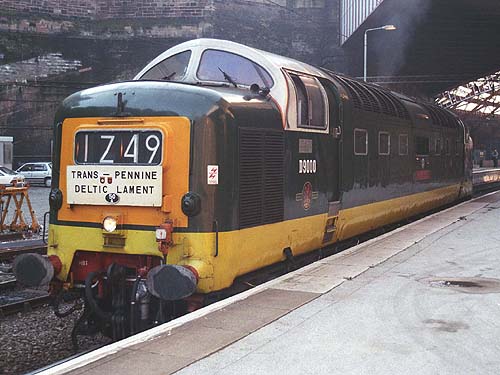 D9000 runs out of the platform after the stock was removed (photo: Gary Thornton)

At this point it was noticed that quite a conference was taking place around the fuel tank of D9000 - a look at the gauge showed we had just fractionally under half a tank left! Time for a few photo's and something to eat before the stock reappeared and D9000 restarted and backed on to the train. By chance I spotted an empty window in the front coach so I decided to abandon my first class seat in favour of the bash back over the Pennines from a vantage point in the front coach. 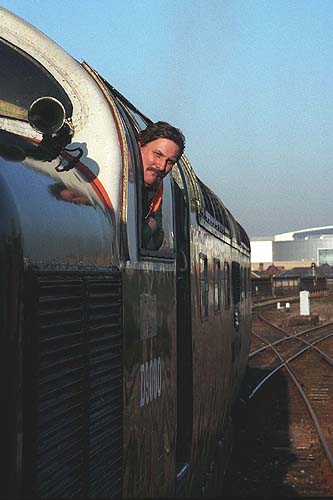 Chris Wayman, the D9000 loco engineer, looks content
with D9000's performance as the train eases away
from a signal stop on the approach to Manchester
Victoria (photo: Gary Thornton)

And what a bash! As we left Manchester Victoria we were overtaken by a class 155 unit. The driver of RSG responded but on the 1 in 59 climb only managed to overload it and, rather embarrassingly, the 155 won! The run up through Stalybridge and onward to Standedge tunnel was simply superb and as well as the enthusiasts that were out, we certainly turned a few heads as we thrashed through the stations en-route. As we left Leeds a rumour started to circulate that the fuel situation was causing concern - and it was possible that we might end up with a class 47 from Doncaster. This was soon confirmed by the stewards and we all baled out at Doncaster to see 47780 backing on to the train. Good news however was that this was only to go as far as Peterborough where D9000 would then be restarted for the last bit to London.

Not surprisingly the mood dropped as the duff screamed away from Doncaster and did its best to maintain a fast pace (which to be fair, it did, as we had gained 3 minutes by Peterborough!) Some slick work and we were soon away from Peterborough (18 down) with RSG firmly in charge but we did not get far, being stopped on the slow to allow a 91 and unit past. A splendid performance saw us gain time as we continued south - Huntingdon 26 late then Sandy (+23), Hitchin (+15) and Stevenage (+13). An unbooked stop here (when Chris Wayman, D9000's engineer, was seen to bale out and peer at the fuel gauge!) cost a bit - but at least gave chance for another firework display as speed quickly rose again. Timings to the Cross were then - Woolmer Green Jn (+15), Welwyn GC (+13), Potters Bar (+14), Alexandra Palace (+13), Finsbury Park (+13) and Kings Cross was reached just 10 down. Unusually we were put into platform 6 rather than the normal platform 1 - that was occupied by 89001! Opportunity then for a few more photo's before returning to my car and the drive home. 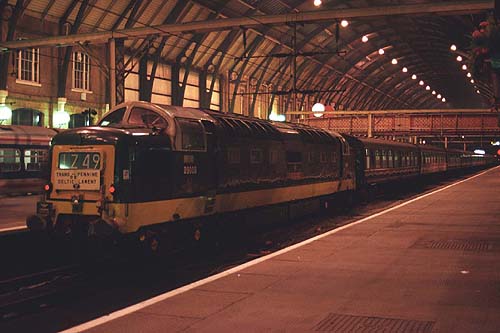 All in all, a superb outing for D9000, despite the unscheduled 47 haulage (which, rather sadly, I actually required!). The tour was also well organised and a credit to the Deltic Preservation Society who certainly deserve a vote of thanks for their efforts.