Following on from Pathfinders very successful trip to Penzance on August 23rd, we had only seven days to wait before leaving Bristol on another D9000 hauled charter train. Destination this time was York, returning via London. Highlights of the tour included the assault of Lickey incline and the requested non-stop run from York to Kings Cross.

As I arrived at Didcot station the large digital clock clicked over to 05.50, bringing back memories of a certain Kings Cross to Aberdeen service that was booked for a Deltic to Edinburgh right up to their final withdrawal. Indeed in the early 80's the service would often get one Deltic to Edinburgh and another to complete the journey to Aberdeen. I digress however, back to the plot.

Shortly after 6am and in rolled 47749 "Atlantic College" (for those of you still working in feet and inches, it was originally 47625) on load 12. I was hoping for my coach (A) to be at the rear of the train and was pleased to find that it was. This would give the cross country run added interest as we would be at the front on leaving Bristol. The run with the 47 was not much to write home about and we in fact turned an on-time Didcot departure into a 12 minute late arrival at Bristol. In the rain we watched the 47 being detached and then wandered to the other end of the train to await the arrival of RSG. It arrived a few minutes later but, for reasons unknown, we did not depart until 0810, 18 late.

Our late departure seemed to fire the crew into action and Filton bank was attacked in typical Deltic style of much smoke and noise and the run to Worcester was treated in similar fashion and, despite the minor inconvenience of pick-up stops at Bristol Parkway and Cheltenham, we rolled into Worcester Shrub Hill only 2 minutes behind plan. At Droitwich Spa (on time) we took the single line to Stoke Works Jn and once there (30mph at the junction) we turned out onto the main line and the start of the climb to Lickey Incline. Speed rose quickly and although I will admit the 2 miles of 1 in 37 did slow us a little, the Lickey did not prove much of an obstacle to D9000 (well, did you really think it would?).

The run through Birmingham was a bit stop and start but once past Saltley we had a fast and clear run to Derby which resulted in a 12 early arrival. A photostop had been arranged here so we had plenty of time to capture RSG from all angles.

Can't say I thought much of the other visiting trains during our stay, several HST's and a few sprinters. I much preferred Derby in the days of 45's, 46's on passenger services and 20's on the freight workings. On a good day a 44 or two might also be sighted and even, on odd occasions, a class 40. Sorry, I'm digressing again...

Nothing too exiting on the run from Derby to York, but there was a big cheer in our coach as we passed by Booths scrapyard at Rotherham where, amongst the debris, were a class 56 and several 50's. As we passed Ferrybridge we also saw all six class 59/2's on shed along with a Network SE liveried "bubble car" - now what was that doing there? Arrival at York, where we had a break for about two and a half hours, was close to time. 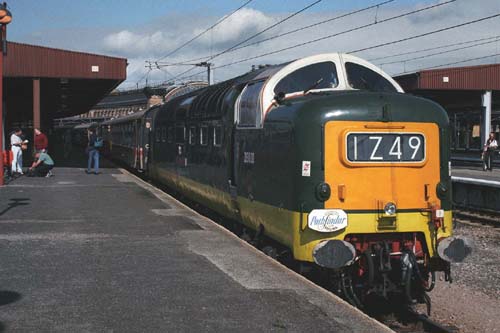 Now came the "classic" Deltic run from York to Kings Cross, requested by the organisers to be non-stop. Speed rose quickly after leaving York and we kept a very respectable pace until just short of Doncaster when the brakes came on. Although much slowed, we were not actually stopped and were soon back at high speed as we swept away past the yards south of the station. Very soon and we were tearing through Peterborough (by now 14 minutes ahead of plan) with London drawing ever nearer. At St. Neots we were turned onto the slow to allow a class 91 to pass and at Sandy we very nearly stopped, waiting the road back onto the fast. South of Welwyn Viaduct and we got routed back to the slow on which we stayed for the rest of the journey. Towards Finsbury Park and another close shave waiting for a signal to clear then, in Copenhagen Tunnel and less than a mile from Kings Cross, we came to a stand, waiting for the road across to platform 1 to clear! Cries of "refund", "failed" etc were heard in our coach at this point. 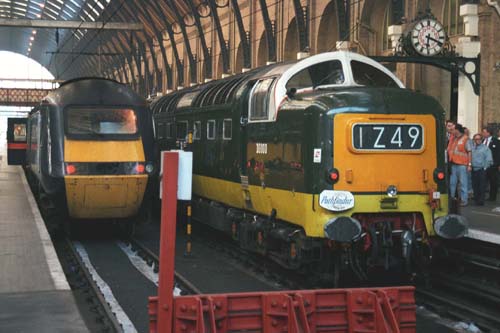 A break at The Cross whilst the somewhat tatty 37012 and 37185 were added and for the next two hours we entered the railway equivalent of the Bermuda Triangle (even the tour itinerary gave no timings over part of the route). 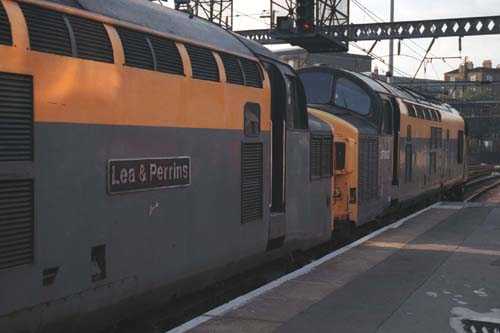 Out of Kings Cross as far as Hornsey where we reversed and, using the Ferme Park Flyover, headed back towards Kings Cross. As we exited Copenhagen Tunnel we took the North London Incline to join the North London Line at Camden Road, the 37's (now at the rear) helping shove RSG around the curve. The line through the former Primrose Hill station was traversed and we joined the WCML for the short run to Willesden. By the time we left Primrose Hill tunnel we were motoring and even our coach, the last one, was full of exhaust smoke courtesy of D9000! Branching off at Willesden we paused in South West Sidings whilst RSG was removed and the 37's ran round to the front of the train. We eventually passed Acton West Jn, by now "dark o'clock" and some 25 minutes late, having taken an hour and 45 minutes to cover about 13 miles...

The run to Reading and Didcot went very quickly (I suspect in part due to the class 37's performance) which saw us only 15 down by Didcot. On arrival I said farewell to my travelling companions and walked back to the car with the sound of the "tractors" still audible some five minutes after departure! Another excellent tour completed (well, for me at least, those going back to Worcester still had nearly three hours on board).