Notes :
(1) First ever visit of a Deltic to Penzance!

When I received a call from a colleague a few weeks before with details of this tour - over 400 miles of Deltic, quite a bit of it over previously uncharted Deltic territory and some testing gradients as well - well, lets say it did not take me too long to decide this tour was a must! Ixion from Crewe was also tempting but I was put off that bit by the 05.05 start time from Crewe (and 23.04 return) and settled on joining at Cheltenham at a slightly more respectable 07.15.

Checking back through my railtouring records revealed details of the last Deltic to venture down to Devon, 55003 "Meld" on RPPR's "The Deltic Ranger Re-run" tour of March 5th 1978. On that occasion our destination was Paignton for a return trip over the P&DR behind Westerns "Ranger" and "Courier" (which didn't actually happen owing to a problem on the preserved line, caused by the poor weather that had also prevented us getting beyond Bristol on the original tour with 55018 "Ballymoss" two weeks previously). By coincidence, our other mainline locomotive on the re-run tour was a class 46, as on the return from Paignton we changed to 46003 at Newton Abbot for a run to Par and back. Still, enough of ancient history and back to the present.

To make Cheltenham for me still involved a 4.30am alarm call but a good run through the Cotswolds (funny, not much traffic about) and I was parked up in the station car park just after 6.30am. I wandered on the station hopeful that the buffet might be open (out of luck) and I noticed we were shown on the departure screen....23 late already! Back to the car and my colleague arrived soon after. Time for a quick chat, including the news that our coach (B) had met with some mishap and we were now in coach C but it was still the second one in the formation (confused? yes, so was I at that time of the morning).

A helpful announcement that the first class coaches were at the front of the train enabled us to be at the right end of the platform when, about half an hour down, D172 "Ixion" complete with "Das-Boat Sea Side Special" headboard rolled in, looking as good as always. Apparently the train was late off Crewe - awaiting motive power! Comments on board suggested that with some good running between Birmingham and Cheltenham D172 had already pulled about ten minutes back.

The run to Temple Meads was quite reasonable and once there we said goodbye to "Ixion" and her ever-present support coach in favour of D9000 which, as we were running out via Bath, rolled onto our end of the train. Time for a few photos and then just before 9am we were off. 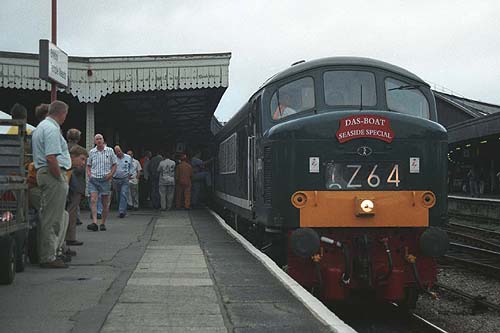 RSG laid quite a smoke screen over the Bristol suburbs as we ran past North Somerset Junction and the speed quickly rose. Our first scheduled stop was at Westbury for a crew change. Noted in the yard were 59002 "Alan J Day" and an EWS liveried nameplate - no, hold on, there was a class 37 (37717) visible behind the "St Margaret's Church of England Primary School City of Durham Railsafe Trophy Winners 1997" nameplate!! As we pulled onto the mainline on leaving Westbury we passed a 100mph board, hmm, tempting or what? The run to Taunton (pick up) and Exeter (passed at 1043, 2 minutes early) gave time to savour D9000 at quite respectable speeds. The run along the sea wall at Dawlish was captured by quite a few trackside photographers then soon we passed through Newton Abbott and onto new track for a Deltic.

A photostop at Totnes was typical of railtour photostops - it was raining and the locomotive was off the platform and under a road bridge! Still, credit to the crew as after a few minutes the train set back a coach length or so, allowing us to photograph RSG off the bridge. 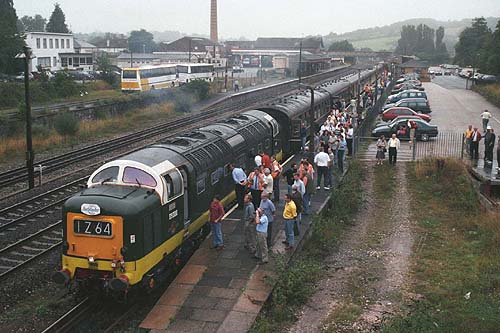 Photostop in the rain at Totnes (photo: Gary Thornton)

With all the rain the climb from Totnes up Rattery bank was quite slow - most of the way we only held around 20mph or so. Another crew change at Plymouth and we were soon onto the Royal Albert Bridge and into a county that had never had a Deltic visit before. The run through Cornwall to Penzance was probably the days highlight for me. The gradients, curves and speed restrictions meant D9000 was constantly on and off the power - absolute magic. 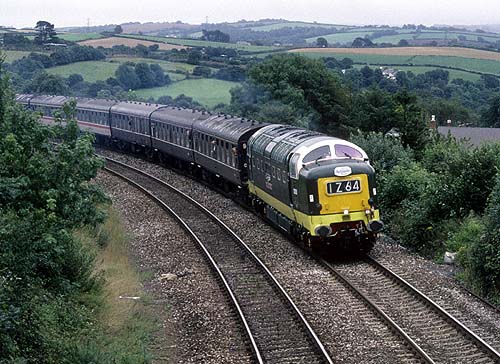 A layover of one and three quarter hours enabled some exploration of Penzance then by 15.35 it was all on board for the return run. 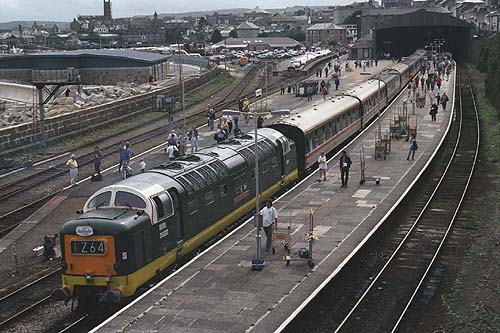 Being at the back of the train meant we didn't hear much of RSG's performance but plenty of views of her as we twisted and turned through the Cornish scenery. Another photostop was arranged at Plymouth, no problems there (except it started drizzling again). 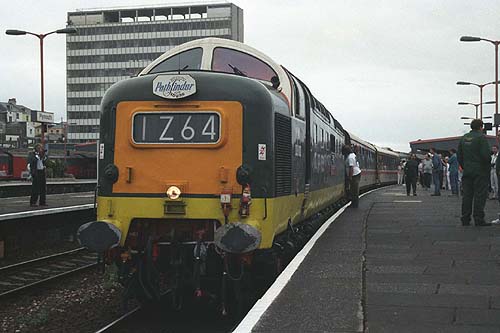 Dull conditions at Plymouth, but who cares? (photo: Gary Thornton)

We departed only a minute behind schedule and despite being held on the approach to Bristol, arrival was still some seven minutes early. We managed sustained high speed running from Exeter right through until the outskirts of Bristol. We must have made an awesome sight hurtling through Taunton and Bridgwater stations "flat out"! What speed did we reach? Two of us in our coach with stopwatches agreed the same figure, but you just had to be there...

At Bristol it was goodbye to D9000 (for seven days anyway...) and hello again to D172. The run to Cheltenham was also electric, too dark to time but I think the crew were trying to match RSG's performance of earlier! At Cheltenham we bade farewell to Ixion as the train departed for Birmingham and Crewe.

Verdict - An excellent day out. I hope someday someone will repeat it (who knows, maybe one day we could even be doing the same with D10xx on the front??)