Connex
Last In Last Out Railtour

Notes :
(1) Confirmation of whether the Shunt Move at Elmers End took place or not is required Tour was booked to ARRIVE in Bay Platform 1 THEN SHUNT to Platform 2. According to the route listed, it did not.
(2) This train was billed to be the last passenger train to use the Addiscombe branch as the line was being prepared for Croydon Tramlink. It left Addiscombe to the sound of many detonators and the same ritual at Woodside. The train also covered the Wimbledon to West Croydon line which was also closing to be replaced by Croydon Tramlink. 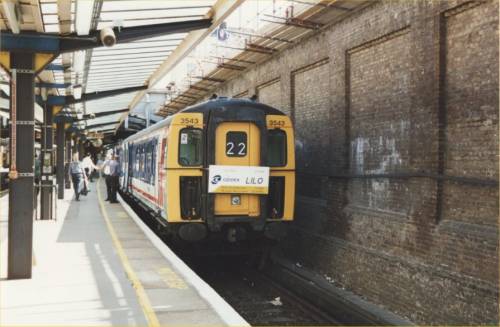 Sources : Shayne Lewis (On the train throughout)
& Alan Sheppard (on the train until London Bridge at 21.31)

Notes on Mileage Columns (from Alan Sheppard)
There were a couple of obvious errors in the mileages, the main ones marked with an asterisk (*) (i) 10 miles lost between Gatwick & Earlswood, (ii) Same mileages for Streatham North & South, (iii) Only ½ mile put in for West Croydon to Norwood Junction instead of 1¾ miles.
So I have decided to do two columns.
The Left hand column shows the mileage according to Southern Region Quail (1st Edition, 1994). The Second column shows the mileage as printed on the timing sheet.