Notes :
(1) Headcode originally uploaded as 1Z69 in error.
(2) Booked route was via Falkirk Grahamston but first reported as having gone via Falkirk High (confirmation required).
(3) 3442 + 2005 on rear.
(4) Train reported as 'very late' back into Edinburgh. 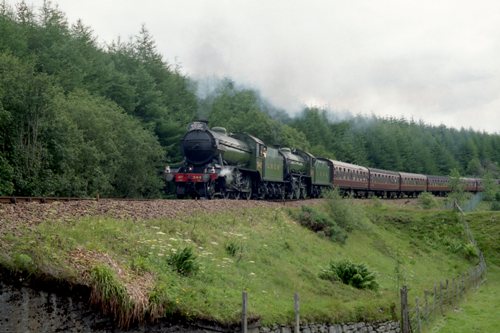 Timings (Booked Only)
(from Brian Reid)

At Cowlairs (Eastfield PL) the class 37s were booked detach the two steam loco support coaches and place them in the 'Ingoing Line'. The steam locos were to attach to the 'west' end of the train and the 37s be re-attached, but to the 'east' end of the train. 37s to haul the train to Sig. C81 on up E&G, detach (1Z61 then worked to Fort William by the steam locos), and run to Ingoing Line to collect the support vehicles to then work to Fort William as 5Z63.