Tour was originally advertised to traverse the Eggborough PS loop but emergency track relaying prevented it. Monk Bretton was offered as the replacement but this was then truncated to Royston Jn due to vandalism to the signalling equipment between Royston Jn and Monk Bretton. Ferrybridge PS loop was also advertised but this was removed from the itinerary as an inspection saloon scraped the bunker during a visit prior to the tour.

Notes :
(1) Tour was booked to run into Drax, round the loop and back to Knottingley where a loco change was to take place. A track circuit failure earlier in the day near Gascoigne Wood Jn had caused many MGR trains to be running late and as a result we were refused access to the Drax PS loop. Instead we sat in Sudforth Lane Down Siding until 56088 was swapped for 37515 & 56102 at which point we headed back towards Knottingley and the booked route.
(2) 37515 on rear.
(3) 56102 on rear.
(4) 56102 & 37515 swapped ends at Roxby Gullet.
(5) Whilst waiting for removal of 37515 in the Trent Yard Reception Line it was discovered that a fault had developed with Keadby Canal Swing Bridge - it had been opened to let a boat through but in the heat the metal had expanded and although it closed again, the safety bolts didn't 'prove'. The train was pulled up alongside Scunthorpe station (on no.1 reception line - which had been refused when requested for the tour!) and waited for a decision. And waited. And waited.... Having pulled up in Trent Yard Reception Line at 17.44, it finally departed Scunthorpe at 20.45, resulting in not doing some of the other freight track on the itinerary. Arrival back at Peterborough was 165 minutes late.
(6) Booked route had been via Applehurst Jn - Skellow Jn - and Carcroft Jn to Doncaster, but abandoned as a result of the very late running.
(7) tour was booked to run via Eastfield Yard on approach to Peterborough station, but didn't on account of very late running.
(8) Neil Wilkinson has records to say the train was diverted via the Hertford North loop on the return leg, arriving back at Kings Cross about 00.10 on the Sunday morning. Roger Elliott has confirmed this diversion from the booked route. A class 317 was used to get passengers home to those stations missed out because of the diversion. John Harrup adds: I was on this train from Potters Bar. On the return leg having arrived at Stevenage, those people wanting Potters Bar had to wait for a Class 317 unit from Letchworth Carriage Sidings. Left Stevenage at about 00.20 and arrived at Potters Bar at approx 01.35. The main line between Welwyn Garden City and Potters Bar was out in several places which resulted in some single line running with crossovers, under the control of a pilotman. An eventful day. 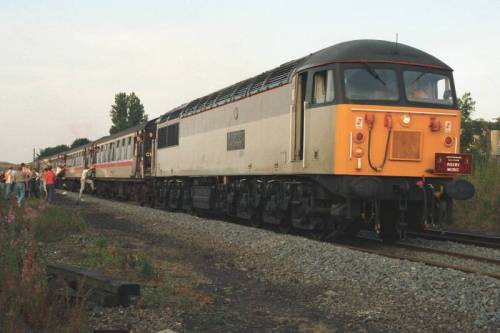