When this tour was first advertised I thought they had got the date wrong and it should have been on April 1st. The reason I thought this was that the rail traffic to Caldon Low and Oakamoor had ceased some years earlier. In fact, I had walked some of the line three or four years earlier and some of the track had even been lifted around Leek Brook Junction! It was however part of the "brave new beginning" of rail privatisation and the just-being formed company Railtrack had investigated and agreed to operate trains over the line for just the one weekend, one tour on the Saturday and the other on the Sunday. The Branch Line Society got the Saturday slot and Hertfordshire Rail Tours the Sunday one.

90001 was our motive power as far as Stafford. Here we were due to have 37's added to the front and rear of the train - it being done here rather than at Stoke-on-Trent owing to operational considerations. 37417 & 37420 were there waiting our arrival unfortunately some jobsworth decided we could not run top-and-tail over the WCML to Stoke-on-Trent and was insisting they were double-headed. A long argument appeared to be looming but 37420 promptly solved it for everyone by shutting down in the platform in disgust. 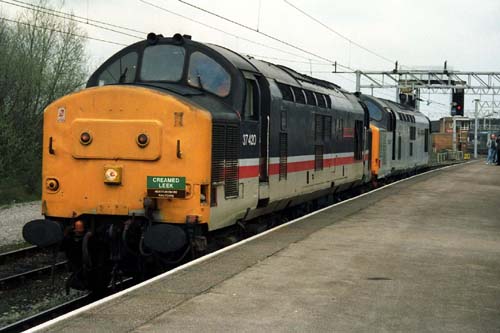 37420, complete with headboard, at Stafford in the company of 37417. In the
event 37420 failed soon after and did not take an active part in this railtour.
(photo: Gary Thornton).

Off we set then with 37417 in sole charge. A wait then ensued at Stoke-on-Trent before 37407 appeared from Crewe and was attached to the rear of the train, which was now about to become the front as we reversed here to access the freight line at Glebe Street Jn, just south of the station. 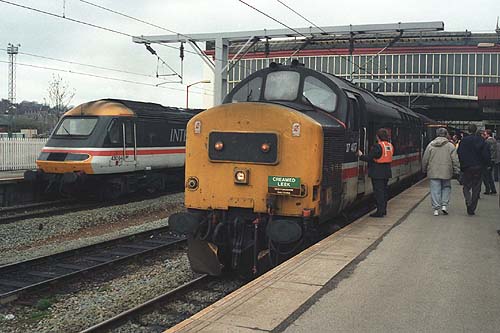 The run to Caldon Low and back was, to put it mildly, slackly timed - five hours for 38 miles! We duly trundled along the branch but even so we arrived back at Leek Brook Junction from Caldon Low over half an hour early so it was agreed to allow a photo-stop to take place. A slow process getting everyone off and on again as sets of steps were used from the guards doors only - the scene resembled a DC3 full of paratroopers as each person got to the bottom of the steps the Hertfordshire steward tapped the next person on the back and said "go"! The photo-stop was much appreciated by all on board it has to be said. 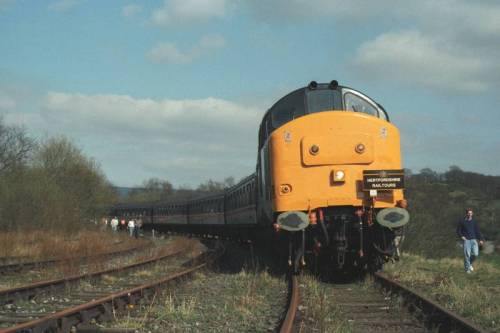 As we set off from Leek Brook Junction a lot of horn blaring from 37417 was heard - it turns out the driver had come upon a young boy madly peddling a plastic tractor along the four foot in the same direction as we were headed! His father was a long way ahead, totally oblivious a train was heading their way! Back at Stoke-on-Trent and we quickly reversed and ran top-and-tail to Stafford (presumably the mornings jobsworth was now off duty) where 90001 took back over charge of the train from the 37's for the run home.

An excellent tour - at the time it seemed like a new dawn for railtours with the newly formed Railtrack showing willingness to re-open long-disused lines for charter traffic, but alas it didn't last and privatisation if anything heralded the slow painful death of enthusiast railtours.