Notes :
This was a "positioning special" to get 46203 "Princess Margaret Rose" from Didcot to Crewe. It was also described as "the last steam hauled train over BR metals" - a reference to the fact that from 1st April 1994 the track became owned by Railtrack - BR was a thing of the past. Carried a "The Mid-Day Scot" headboard.
(1) 47630? Confirmation required. 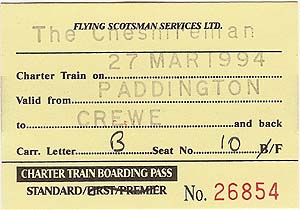 Gary Thornton's ticket for the tour.

This was not a "true" steam railtour but rather what was called a "positioning special" - it was required to get 46203 "Princess Margaret Rose" from Didcot to Crewe so what better way than under its own steam and with fare-paying passengers to offset the cost of the movement! For the passenger it was good because the fares were much less than the "proper" steam-hauled tours and, as in this case, the mileage was still very good, with 46203 hauling from Didcot to Crewe.

The day didn't get off to the best start - Sunday morning early and my parents had arranged to pick me up to get to Didcot. As a family we are always good timekeepers but a few minutes after they should have arrived I called them just in case there was a problem. I was surprised when Mum answered and particularly when said they'd be round in plenty of time - pointing out they were late already we both realised at the same time that they had forgotten the clocks had just gone forward an hour in the early hours!

We needn't have panicked. We arrived shortly before departure time but 46203 was still fussing about inside the GWS site at Didcot. When it came out it took ages to get onto the train - at Foxhall Junction there was a delay as the control of the junction had just passed from Reading to Didcot (or vice-versa, I don't now remember which) but the signal phones had yet to be transferred! A BT line had to be used to get the signaller to make the necessary points and signal movements.

Being sat in standard class I can't say I remember too much about the run to Crewe - at least we got to see a lot of 46203 in the distance as we rounded curves along the way. Because we were running late various planned photo-stops were abandoned to catch-back time. Watering stops were however taken at Gloucester and Hereford where we were able to get off and view the loco.

As we ran into Crewe we were told we could claim to have been on "the last steam-hauled train ever on British Rail metals". As from 1st April control of track and infrastructure passed from British Rail to Railtrack, the next steam excursion not being until 1st April. Something to tell our children I guess. 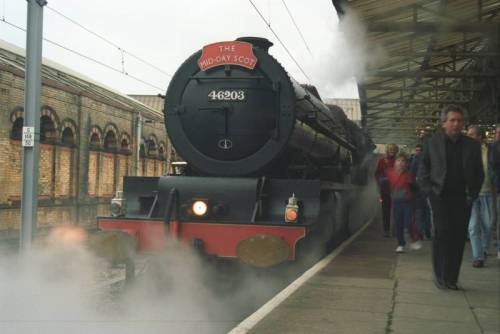 At Crewe 47630 backed on to the train and sped us homeward.