Notes :
(1) Reversed in Worksop yard rather than taking direct curve between Woodend Jn & Shireoaks Station Jn as booked.
(2) Train diverted to Stafford owing to overhead line damage south of Wolverhampton but was then re-routed back via Bescot rather than via Nuneaton as anticipated! The late running resulted in significant changes of route (see notes following). Tour tickets were also then valid on service trains to get people home. 87016 on the 21.33 ex-Nuneaton to Euston being one example.
(3) Booked route had been via the Sutton park line.
(4) Booked route was via Bletchley Flyover, Oxford, Reading, Staines & Twickenham to London Waterloo. 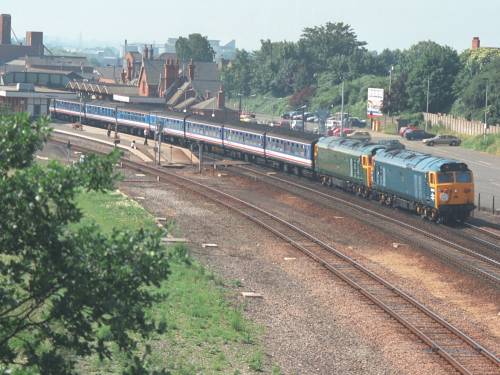 Above mileages after Worksop to Chester require approx 1m 21ch plus length of train adding due to the off booked route reversal. No account is made for the evening diversion via Stafford or MML.