Notes :
(1) To celebrate this day being the last one when class 50s were scheduled to be used on West of England service trains, Network Southeast rostered 50033 'Glorious' and 50007+50050 on the trains between Waterloo and Exeter. As service trains they do not strictly qualify for inclusion on this Website, but have been recorded to confirm they were not charter trains. The above information records one of the return trips scheduled for 50033, but it had failed the day before at Basingstoke with generator and traction motor flashover damage. Contemporary reports suggest the class 60 handed over to 50007 & 50050 at Salisbury? The same report also details the pair of 50's working only between Salisbury and Exeter and describe the 16.55 ex-Waterloo as being the 'final Exeter service'? The advertised train workings are as given below.
(2) The trains booked to have been hauled by 50033 included Directors Saloon TDB975025 in the consist - for a fare of £75 passengers got a one-way journey in it, including a meal, and return in first class. 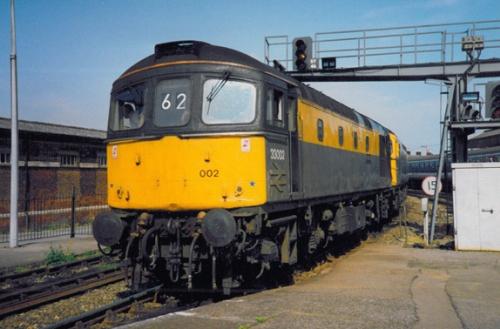 The 33's coming off the train at Salisbury on the return (photo: Nick Blyth)