Scotrail
The 305 Coast to Coast Railtour

Notes :
(1) Points failure prevented the booked route (Shields Jn - Larkfield Jn) being immediately used, a double reversal being required to gain the booked route at Shields Jn.
(2) Advertised return route was the reverse of outward i.e. Law Jn - Motherwell - Uddingston - Newton though Jim Howie suspects by the timings it may have been intended to run via Holytown Jn and Hamilton Central.

This railtour was run by Scotrail on 22nd February 1992, as you would expect for that time of year the weather was foul, a miserable wet day.  The Tour was formed by 305519 and departed on time at 10:47 from platform 10 at Glasgow Central. 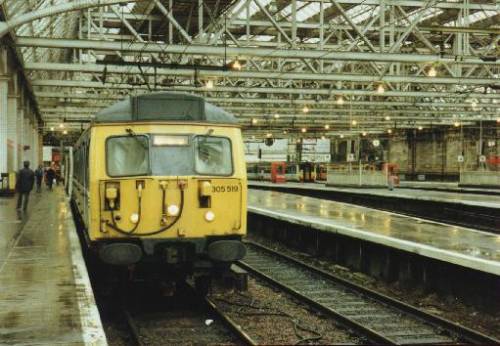 The initial stage of the tour was by the normal route to Ayr, with a brief stop at Kilwinning and a spell in Barassie loop.  At Ayr the passengers were permitted to stay on the train for a bit of rare track into Townhead C.S. before returning towards Glasgow, departure was delayed by 19 minutes trying to round up the patrons.  Concern was raised that part of the advertised route, via the normally freight only Shields Junction to Larkfield Junction line, would have to be abandoned due to a points failure at Shields Junction, but some quick thinking by control allowed a reverse at Bridge Street onto the Smithy Lye through siding followed by another reverse at Shields to regain the advertised route.  The points failure cost further time and by Rutherglen we were 35 minutes late. Some fast running was then put up to Carstairs to try and regain the time lost by the points failure and bashers leaving the train at Carstairs when checked at the platform signal were told to get back on PDQ!!  Carstairs was left 23 down but there must have been some generous recovery time over the Cobbinshaw stretch as Edinburgh was reached bang on time at 14:49 before pushing on to North Berwick.  Here again there was only a brief stop for ten minutes before retracing our steps to Edinburgh and Carstairs. 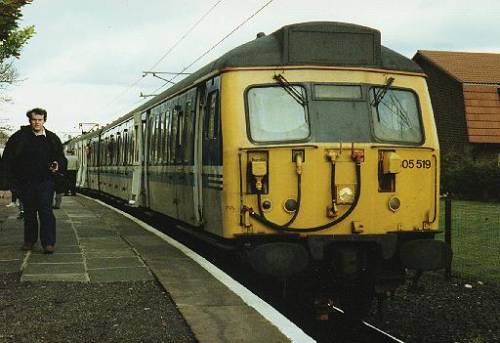 The other coast - the unit is seen at North Berwick (photo: Jim Howie)

At Law Junction there was a surprise deviation to the advertised route when we were sent up the Holytown line then Mossend East to South Curve to pass through Motherwell “wrong way” and onto the Hamilton Circle to Newton, then back to Glasgow Central.  Arrival at Glasgow was at 18:15, 23 minutes late, mainly due to 10 minutes lost to signal checks between Haymarket and Kingsknowe then later a further 7 minutes approaching Newton.

This tour was intended to be the first of a series of tours run by Scotrail for enthusiasts, but as far as I know there was only one other tour took place, using 303048 to explore some rare track on the Strathclyde system