Notes :
(1) Route confirmation required - above is from booked timings. May have been additional reversals in West Marina Depot.
(2) John F Kappler believes this tour used DEMU 1001 but confirmation of this is required. 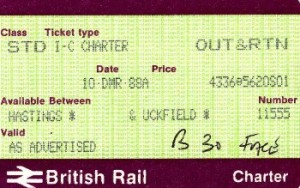 Note: The tour timing sheet was inconsistent in how times were presented and did not always distinguish between passing times and stops (it was using a full stop mostly, including where a reversal had to take place). In some cases an arrival and departure time were shown with 'a' and 'd' but in others where a reversal had to take place only a single time was shown, sometimes with an 'a' but in other cases just a single time was listed without indication if it was arrival or departure. As Webmaster I have tried to show the timings in the usual Website format using / for passing times and full stop where a stop seemed likely or necessary. Assumptions have had to have been made so my conversion may not be perfect!