Notes :
(1) Howard Parker comments: A sheet giving route information was given to passengers. Nottingham and Beeston times were not shown for the outward journey so it is assumed that passengers from these stations caught a connecting train to Leicester but remained on the excursion on the return. At Exeter St Davids on the outward journey the 09.30 from Paddington was noted having 50050 attached as the rear power car was not working. The excursion left in front of this but was looped at Dawlish Warren for it to pass and again at Totnes for the 10.30 Paddington HST to overtake, these stops resulting in the late arrival at Plymouth. Teignmouth and Totnes were alternative destinations. 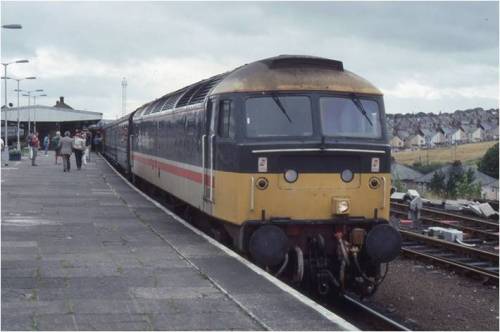 47406 at Plymouth ready for the return journey (photo: Howard Parker)