Notes :
(1) Locos replaced at Peterborough due to 20185 suffering at traction motor fire.
(2) At Stratford everyone was to have alighted from the tour and make there way to Tower Hill for Fenchurch Street by way of Docklands Railway. Having over 400? enthusiasts storm the Docklands at the same time caught them off guard and with Docklands having trouble, the guard and platform staff let the remaining enthusiasts who did not join the rush, stay on the tour to get to Fenchurch Street.
(3) Mark Blundell comments : At Barking everyone had to leave the train as the coaches had to go into Ripple Lane Yard for an assisting engine to take the stock into Fenchurch Street. We were assured that they would stop and pick us up to take us to Fenchurch Street. Sure enough in pulled the train with 47 204. [Not sure, but I think the 20's came light engine.] 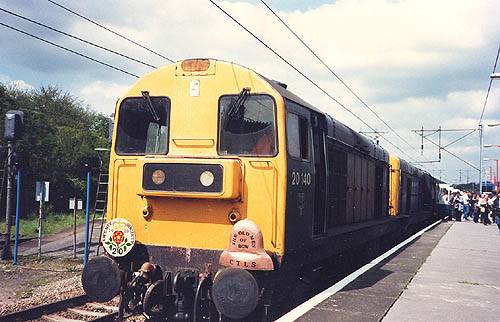 Sources : Richard Hughes (On the train throughout)
& Mark Blundell (joined at Peterborough, left at Fenchurch Street)