Notes :
(1) The tour was scheduled to return from Hastings to London by the '1066 route' (i.e. Hastings - Battle - Wadhurst - Tunbridge Wells - Tonbridge then via Sevenoaks to Otford Jn) but the clearance of the class 488 stock for this line had not been completed so the train was re-routed via Appledore to Ashford, Maidstone East, rejoining the original booked route at Otford Jn.
(2) Nick Lawford (the train manager) comments : There were a few more complexities before the train ran. First of all, when it was planned, it was to have been one EDL + 2x3car GAT sets (488/3) + GLV and we fully booked the train on that basis. In the standard class that meant we had - at the time of planning - 6x56 seats = 336. But quite close to the train running, 488/3 stock was reduced to 48 seats per car when they replaced some seats with more luggage racks (as LH TSO they had 64 seats, they were first altered to 56 on conversion to GAT stock, then to 48). This meant we had lost a total of 48 seats, but we had already sold them. The solution was to add a 3rd 488/3 i.e. now we had 9 trailer coaches (and we could sell more seats) + GLV. This made the train too heavy for 1 EDL for the diesel sections. So the 2nd EDL was diagrammed. This made for further complexities. SR third rail trains have a current limit, and 2xEDL is the normal maximum. A special instruction had to be issued for the GLV to be cut out, normally it is motored, but for this train acted only as a driving trailer, not drawing power. Even so, there are places where 2x73 may not go on electric traction, and Seaford is one of them. So in addition to the non electrified sections on diesel running, we were booked - and got - Newhaven to Seaford on diesel. The bit about Mk.2 being banned between Hastings and Tonbridge was only 'discovered' on the Thursday, just 2 days before the train ran. Diversion via Rye was the only escape route, which meant even more diesel running.
(3) Working instructions issued for the Eastleigh depot loop, Bedenham branch and Fareham shunt movement showed the headcode as 1Z09.
(4) Locomotives propelling.
(5) LASERman comments: Timings from Hastings onwards were provided on a separate sheet superseding those in the main tour itinerary and included a note to the effect that a Class 33 locomotive would be attached at Eastbourne and work to Ashford where it would be detached. On the day this didn’t happen and the EDLs worked on diesel power propelling with much slipping in heavy rain up Ore bank causing the rear coach (where I was seated) to vibrate violently as a result of the combined slipping and full thrash from the locomotive’s diesel engines.
(6) Locos 'gapped' over pointwork on the approach to Waterloo. 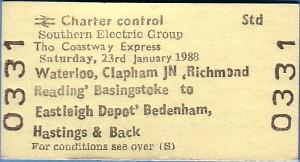 Sources : Paul Griffin (on the train from Basingstoke to Fareham only),
Nick Lawford (Train Manager) & LASERman

Notes :
(1) John Broderick suggests the distance from Hastings to Waterloo by the above routing was 108m 15ch and thus the total tour distance was 332m 32ch, however this is unconfirmed (and does not allow for the reversal at Fareham Jn sig. E283 on returning from Bedenham, rather than at the station as shown in the timing sheet).

Original tour itinerary timings & distances from Hastings (superseded by those above);