Notes :
(1) The train ran three times, reported as departing from Basingstoke at 09.40, 12.40 & 15.40 respectively however Alan Osborn queries this as he has a different set of timings, travelling on what he has as the scheduled 13.00 departure from Basingstoke.
(2) Alan Osborn comments: Whilst on the Military Railway the 2 DEMU's were uncoupled and ran separately around the system - trains running on sight only - no signalling, preceded by an Army Diesel Locomotive - a bit like St Trinians!  Presumably this was due to tight curvature.
(3) Webmasters comment is made in regard to the tour ticket, which is dated Saturday 28th February; I have a copy of the tour itinerary which is clearly dated Sunday 1st March and I have also been unable to find any evidence that train(s) ran on the Saturday, all Internet sources mentioning only 1st March. It is therefore assumed there was a date change or somehow the tickets were simply mis-dated in error.

Source : Richard Swejkowski (on one of the trains throughout)
(Additional information supplied by Martin Pettit) 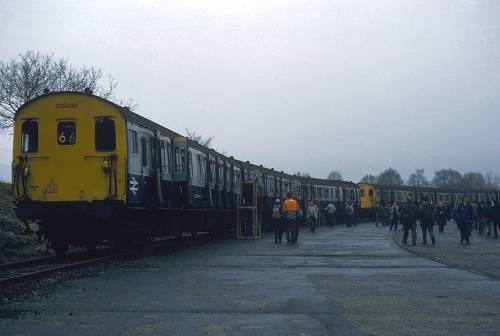 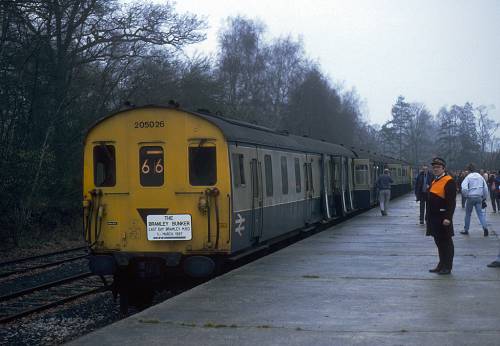 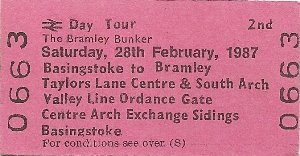 John Broderick's ticket; despite the date it is
believed this ticket was for this day's trains

The only specific timings issued on the day were for the depot itself for each of the three trips as given (in lapsed minutes) in the "Time" column. The booked and actual times given are for the train on which Alan Osborn travelled.