Notes :
(1) Some conflicting information received about the trains routing between Birmingham International and Birmingham New Street. One report suggests the train went via Aston and reversed however Nick Ross confirms the train took the direct route. The class 86 replaced the 25's owing to the west end of Birmingham New Street station being closed for engineering work, preventing a loco run round. The class 25's followed light engine from International and came back on the train at New Street. (additional information courtesy of David Hills). The identity of the class 86 was raised, originally I had it as 86327 but Stew Robertson has confirmed it was 86237, further backed up in Nick Ross's report and by Nick Lawford. 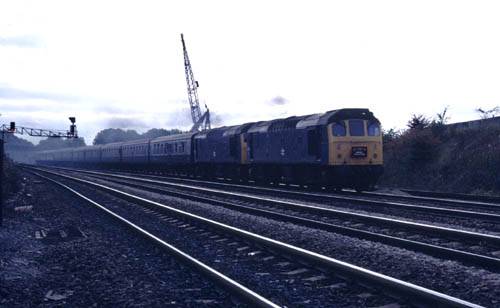 Complete with cabside "handle with care" stickers specially cleaned 25313 and 25249 stood at an otherwise deserted Euston. Front coach seats and loud Sulzer thrash up Camden Bank generated a sound atmosphere which was to remain on this 500 mile rodent jaunt all day. The usual Sunday surprises saw on the day changes to the route. At Bir Int'l we were routed into Platform 1 where some unspecified traction was to haul us Int'l-New St. We hoped the kick out would be some big 47 on our vaccum braked stock. Alas, 86237 was provided!. The rats rejoined us at New St on a ratable route to Leicester, Derby, Hope Valley, Manchester Pic and Liverpool taking in many of their old haunts. Lime St saw many scratch men swelling our already full consist with Petroleum Sub sector 25904/25910 making a rare passenger outing to Runcorn, Frodsham and Chester. We were then turned on the Chester triangle to the jubilation of the front coach crowds. A people power photo stop at Chester then onwards to Crewe where 25249/313 took over for the last WCML passenger run. A classic steady Sulzer storm taking in Bescot, Stechford, Weedon and Bletchley where all the power box crew watched us pass. A late evening return to Euston, then a dash for a train home, a hugely enjoyable tour was over.