Notes :
(1) Passengers were taken by bus from Haverford West to Fishguard Harbour.
(2) Jeremy Hartill comments: The CIE tour was a riot we were booked for an 071 but it had failed so we got 012 instead which was great for me. The set was a coach short so one was nicked off the Dublin train. The breakfast served by CIE was very good. At Limerick G611 was giving rides up and down the bay for all who could get on, that included hanging on the outside. 012 took 29½ min from Limerick Jn to Limerick with a max of 67mph. The little CIE Bo-Bo’s were only 950 hp so with two locos, 9 coaches and about 1400hp at the rail it was not going to be a fast trip but the 35 miles from Athenry to Athlone Midland took 43.5 min with 72mph max after Woodlawn. We then ran on the freight only route, now closed line to Mullingar at around 50mph. The 28 miles took 38 min and the final 51 miles to Connolley 70½ min but there were a lot of checks near Dublin. Back on BR the E.C.S. did not get into Fishguard until 04.31 and then we had to wait until 05.18 for a guard. 47551 ran well from Fishguard when it got away. There were good climbs of the steep banks in West Wales. Later in the day 47524 made a good attempt to regain time with 95mph at Berkley Rd and 91 at Eckington. Rejoining the mainline at Stoke Works Jn from Worcester we stopped to set down at Bromsgrove. From a standing start it took 6m 50sec to Blackwell and reached 23½ mph on the Lickey bank, a proper thrash, sounded great at low speed and full throttle.
(3) UK outward leg originally shown as hauled by 47606 throughout but then corrected by Jeremy Hartill. 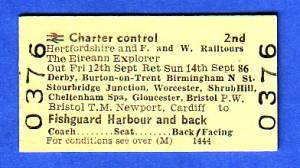