Notes :
(1) Nick Lawford comments: Between Andover and Ludgershall 25181 suffered some kind of braking trouble and was a complete immobile failure by the time it got back (25181 was withdrawn as a result - this is how it came to languish at Eastleigh : it was unmoveable). 33011 was despatched to assist and worked in multiple with 25191. At Salisbury on the return the 37s replaced the 33 : 37s were not booked, it should have been 2x25 all the way back to Bristol. LASERman adds: The brake fault on 25181 was that the handbrake had been left on, possibly from Bristol and resulted in extremely bad flats on the wheels. The replacement 33 (from Salisbury?) was deliberately marshalled inside the 25 at Andover causing a little bit of extra delay, but I seem to remember the train was about either 2 or 3 hours late by then, so that the 25 was on the end of the train for the benefit of photographers who would undoubtedly want a 25 rather than a 33 to be visible round the Southern. The 33 was removed at Salisbury so that the Western didn’t pinch it. A crew previously sent to Westbury to collect some interesting locomotives to work forward from Salisbury and returned with 2 x 37. 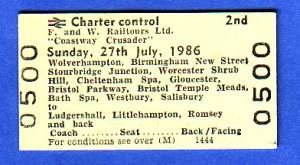