Notes :
(1) 25288 piloted 40122 as the latter had a broken window. 25288 & 40122 then worked service trains as follows;
2J36 : Pwllheli - Porthmadog
1A85 : Porthmadog - Euston (as far as Shrewsbury)
(2) 25288 was dumped at Shrewsbury with a fuel leak.
(3) Harry Harper adds: The tour was booked to be the pair of 37's from Pwlheli to Porthmadog (for engine release purposes),  the 40 having already taken the service train to Porthmadog with the locos swapping  back to their respective trains there. Owing to Class 25 troubles it and 40122 continued on the Porthmadog - Euston service to Shrewsbury, where the 25 was discarded & 40122's broken window problem obviated by turning on the triangle prior to the return of the tour. Naturally two loco hauled trains caused headscratching at Pwlheli & the railman was addressed by the late lamented Wellington in the following terms 'The last time you had four engines here was the 26th August 1967' ... (pause for effect) ... and you made a bu**er of it then'. Another sideshow was a basher of principle who both refused all railtours & refused all 25's. He had done the 37's down on the service with the intention of having the 40 to Porthmadog. Because of the 25 he preferred a bus Pwlheli to Porthmadog in theory for the 37''s forward, which was of course the railtour. He was forced into a steam hauled retreat up the Ffestniog, principles, if not dignity, intact. 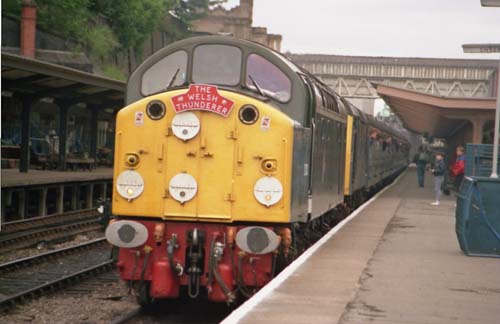