Notes :
(1) Failed to get to Barry Island owing to a points failure.

From Nick Ross;
A reasonable start to the day for me saw 86030 on the 0350 Euston-Bletchley 'Milk Empties' staff train from Leighton to Bletchley for 310092 forward to New St. As the tour arrived here, most of my colleagues were observed getting off having scratched the rare 25109. Rumours of the last 20's to Skegness being a bigger attraction. This was a bonus as the tour was far from full and I had the luxury of a second coach bay of 4 to myself.

The rats were soon chattering away up front Sulzer style building up the mileage. What may well have been the last ever rats to Barry Island was thwarted by a points failure on the start of the causeway to the North of the Island. After a delay of half an hour 47242 was borrowed from Barry depot to haul us back to Cardiff. As 242 was coupled a number of anti 47 men were seen doing desperate ballast leaps , this was to cost them a very enjoyable chunk of the tour.

With 242 quickly detached at Cardiff, the rats headed West to Margam yard where beast 37237 took over to take us onwards to Burrow Sidings to run round before 45 minutes of awesome thrash on the ascent to Onllwyn. Under sunny skies locals in the pubs waved, traffic stopped etc to watch us pass.

We retracrd our steps back down the Vale of Neath, to Burrows and then Margam before the rats replaced our South Wales syphon. A good run back to Brum followed with much Sulzer sound over Hartlebury and a virtual right time arrival back at New St.

From Jeremy Hartill;
I travelled on this from Birmingham, a very enjoyable day. 410 tons full load is a heavy train for a pair of 25's or 1 class 37. Leaving Gloucester Yard Jn the the 25's worked up to 64mph on the climb to Standish Jn, and went on to reach 87mph at Berkley Road, this meant they were able to climb up to Yate at a minimum of 74mph and covered the 32½ miles from Gloucester Yard to Parkway in just under 30min. After the drag back to Cardiff they ran via Ninian Park to Margam and got over Llanharan at 70 and managed 89 before Bridgend. The return saw them climbing to the well named Stormy Siding up the 1/93 at 44mph and good running continued. Seven Tunnel to Gloucester 35min, another 89mph at Eckington and the final step climb from Stourbridge to Old Hill at a minimum of 31mph. 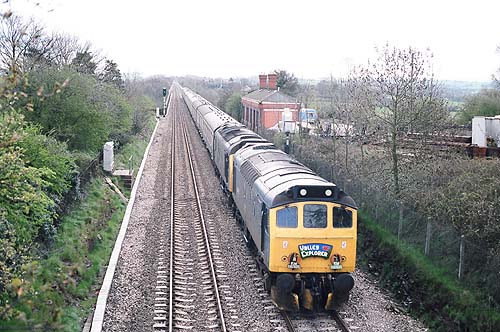 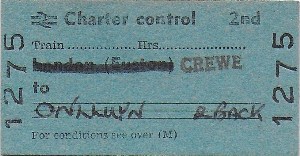