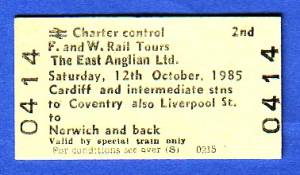 A regulation half-hour down the unusual 37/33 combination arrived at New St for insect mileage to Coventry for a few of us. The rat run that followed was sheer hell! Rugby, sociably gave us the "old Road" via Weedon and a top whack amp driver plus a strong pair saw speeds of 98 mph plus sustained on the descent from Hanslope virtually to Watford. It was rumoured that some can ahead of us were holding the racing rodents back.

Rare, massive, monstrous 37053 was given fast 2h 15m timings non-stop Liverpool St - Norwich but she failed to match the rodents for excitement. Sheffield - Blackpool regular 37226 returned us via the familiar old SF and MR syphon haunts of Cambridge and Audley End back to Liverpool St.

Disaster here in that 25297 had been failed on SF with defective break blocks and 31144 substituted. The goyle did not multi at all well so we staggered home. Rugby routed us via Northampton adding to the totter factor. To add a final withering we lost just enough time to miss the 1927 Wolves-Euston home from Coventry, fate decreed exotic power in 81003 that night.

The 37/33 combination replaced the odd couple at Coventry to end a good tour but a shame about that slow speed fitted goyle!