Notes:
(1) Almost to end of engine release road.
(2) To water the DMU.
(3) Past first gate, to gate before LPG terminal.
(4) Close to former platform on through alignment.
(5) To level crossing beyond British Leyland factory.
(6) Alan Osborn comments: The single car DMU was not permitted to travel through Ledbury tunnel with passengers as this is a single bore and hence no means no evacuate, I was one of the participants in the single car and we were instructed that the train would stop at Colwall where we were to disembark and transfer temporarily into the 3-car set., stopping again at Ledbury so we could transfer back. Alas with everyone ready to disembark the train did not stop and we proceeded through the tunnel fully loaded with passengers, although we did pause at Ledbury afterwards! 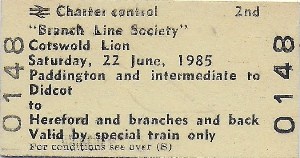