Notes :
(1) Banked train up The Lickey by 37219 + 37241.
(2) Balloch to Balloch Pier was closed to regular passenger trains in 1983.
(3) Whilst on the NVR, French kettle 230D116 was also out, working a service train. Some passengers travelled on this between Wansford & Yarwell Jn.
(4) Route confirmation required - above is from booked timings. 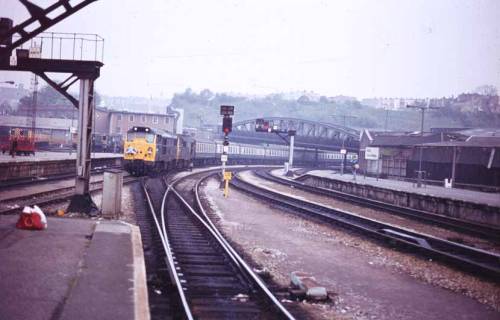 One of a series of F&W Railtours Skirl rail tours around mid May. Load 14 mostly SK, but split into two loads of 7 between Edinburgh, Oban and return. Note of stock used (above) suggests an 11/4 split of the portions which does not add to 14! Can anyone clarify?

Highlights day 2 were the trip via Millerhill yard to the loop on the formation of the Waverley route, The pair of slow speed fitted 26's around the Edinburgh suburban route and the Bombs to Methil. 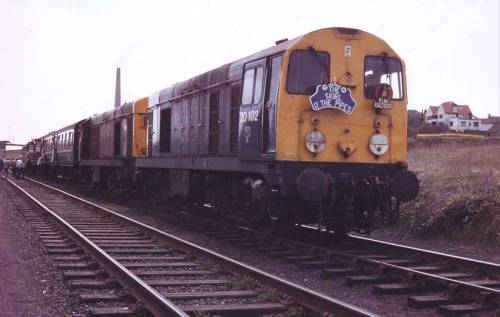 One of our party (an ex-RAF type) had decided that the direct portion to Oban was most likely to travel via Cowlairs East to North which he needed so he changed into that half, missing the trip around Fife. Close inspection of the timing sheet however, suggested that it was unlikely as it was booked a loco change at Cowlairs, which it did at Cowlairs West. Our portion was booked via Cumbernauld and Springburn, so would not do the curve. This was not the case because at Greenhill Lower Junction the driver stopped the train at a green signal. After a short call on the signal telephone it turned to red and then we were routed direct via Lenzie and the Cowlairs curve (not that I needed it having done the Sundays Edinburgh-Oban). Needless to say considerable fun was had at Oban when we saw him again. Loco haulage to Balloch Pier was unusual to say the least, and the drivers were not as experienced at top and tail working as now, with walky-talky radio communications between the 26's at the front and the 37 in the rear, all three engines powering at times. The return run with the 27's through Queen Street low level was noisy, with a lot of bellowing.

The third day started on a low note with 37186 steam heat Cardiff engine being provided from Edinburgh (Its a Skirl therefore it must be 37186 - I had over 1000 miles behind it on Skirl's). Early Sunday morning and the Peak had gone, so a steam heat 47 from GD (it was the only time I had it). D9000 only recently in preservation replaced the 47 at Orton Mere to Wansford. To get the track in as far as Yarwell Junction the Nord 4-6-0 had to be taken, but only back to Wansford, for the Deltic back to Orton Mere. At least one of the 37's was changed for the return from Leicester.

Times (Booked Only)
(from Paul Griffin)