Notes:
(1) A subdued atmosphere remained on this tour due in part to the common power allocated. It was rumoured that the driver that was to take the tour up the branch rejected the allocated rat in favour of 31248. It thrashed well on the long climb along the scenic Rylstone branch before stopping at the work’s gates in the middle of nowhere before the EH pair returned us to Skipton. On the return run the rats exceeded 92 mph on the Sheffield-Derby section for the fastest run of the day.
(2) Originally uploaded with reversals at Bristol Temple Meads each way, MisterC has it noted the train ran via Bristol Parkway on the outward and Gloucester on the return. 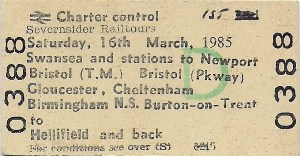