A tour to remember - it's February and snowing but so what D200 has a steamable boiler. 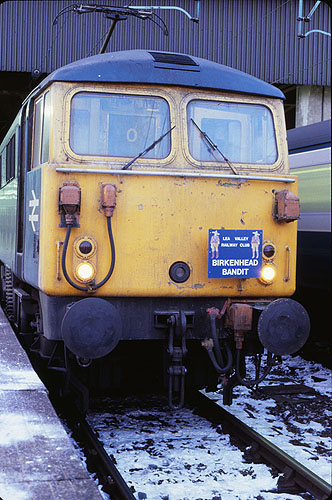 Back to the beginning, I was up at some ungodly hour to cover the booked Stechford-Aston working a couple of weeks before this tour, imagine my disgust when 87003 turned right at Stechford - isn't it always the way?

We eventually pulled into a chilly snowbound Stafford to find that although D200 was steaming the set hadn't been steamed for months/years and there was no way to get the steam down the frozen pipework. 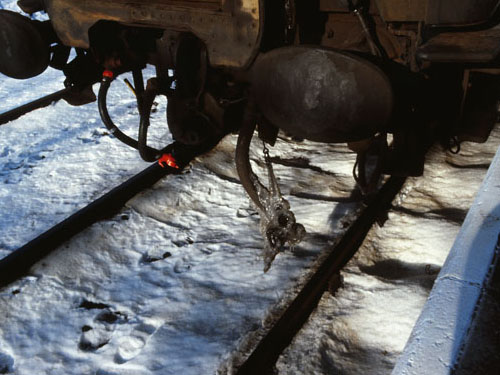 Commendably the powers that be left the ETH from 87003 connected 'til the very last minute and then it was off, via the very required Bushbury Chord and the Wrexham General to GC link to Birkenhead where we turned on to the MDHB line through Beirut (Birkenhead). Warnings to stay inside the train (as if we wanted to open the windows on this icebox) were heeded as the local militia proceeded to snowball us (with bricks in the snowball!!). 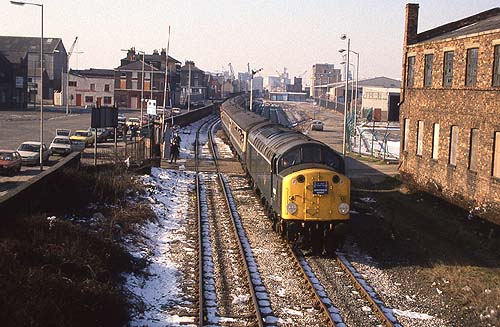 D200 is seen traversing the MDHB lines at Canning Street North (photo: John Wood)
The warning about keeping heads in appears not to have worked entirely...

Superb bit of track to a break of around an hour/hour and a half at Rock ferry. Hopes of a warming bag of chips were dashed when it transpired that the Chippy was closed for lunch! 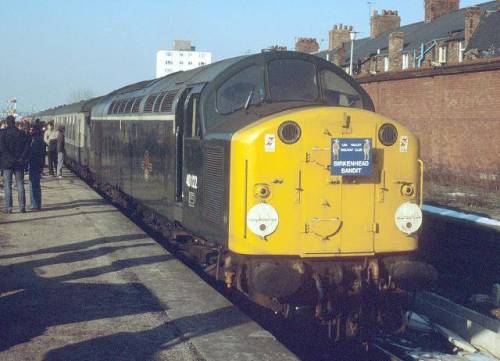 Back into the freezer for a chilly dash to Man Vic were the booked 45/0 was swapped for 45150 and no one complained!! 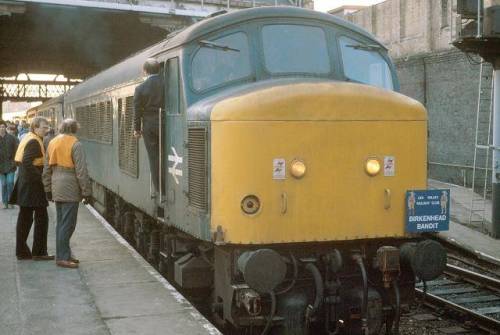 As darkness gathered, and toes and other extremities defrosted,  we ran down to Sheffield and the final track bashing treat of Brightside Junction to Tinsley (Will anyone ever run a tour that avoids Tinsley? I have all the curves but not the straight through from Sheffield to Rotherham)

After a long dark trundle down the NESW it was a pleasant surprise to score 85004 home.