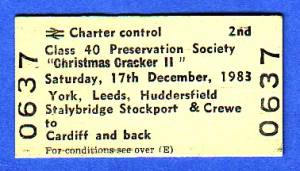 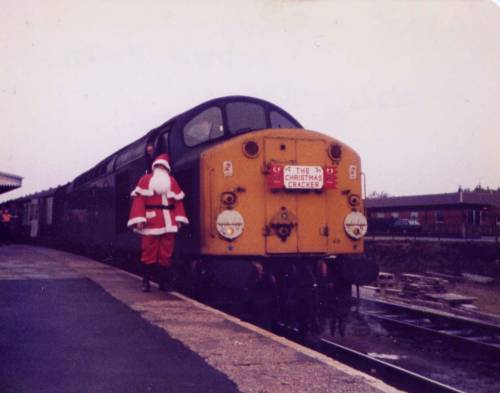 "You're the one who's crackers" was the girlfriend's farewell as me and a mate left Leighton Buzzard for the "Christmas Cracker II" railtour. Friday's last morning Northampton - Euston "cobbler" was a "solid" roarer turn or so we thought until 86323 droned in to whisk us South to Euston.

With a day return to Oxford bought at Paddington 50008 gave a characteristic noisy run to Reading where even on a cool, grey December morning there was always something of interest. ETH power dominated all passenger traffic including a few pre-Christmas relief's. Booked but unfamiliar to us was 45124 arriving with the 0945 Cardiff-Padd returning with the 1307 Padd-Liverpool. We waited for the 1246FO Portsmouth-Leeds with it's booked Crompton to New St. Today 33018 obliged, passing preserved 7018 on show outside Didcot's steam centre. We wished we could stay on for more respectable mileage but the Liverpool St rush-hour beckoned so we settled for 50008 to thunder us back to Paddington.

Typically, 37049 appeared to work the 2205 Liverpool St - Cambridge but we had to turn this machine down for haulage as the main event beckoned the 230 Kings X-Edinburgh. Our early boarding gave us good fornt coach seats before the returning late evening commuters all piled aboard. Immense good fortune saw 46044 back on at the business end , this was my last 46 for haulage, all those years on the Gloucester-Bristol circuit finally paying off out of London. A ritualistic bellow as we left the Cross alarmed a few normals!

By Peterborough the front coach was much quieter with a few "hard core" peak bashers building on their impressive mileages. Getting off any overnight train in the early hours whether at York like this morning, or Edinburgh, Bristol or Birmingham is much the same, rancid!

Bleary eyed photos of our 46 followed as her boiler was watered before continuing North. We camped out in a DMU to keep warm. The "Christmas Cracker II" was to start from Leeds but our tour tickets were valid from York on 45136 on the 0710 Liverpool and the first 2 coaches were soon filled.

At Leeds the 11 coach tour rake was already in with 40028 "Samaria" at the head with her boiler steaming away strongly. Once on the move that special atmosphere perhaps unique to CFPS tours soon had us all contributing to enjoy the "crack".

40028 thrashed over Standedge in style before passing the familiar 40 haunts of Stalybridge and Guide Bridge where 40001 was stabled amongst her class 37 replacements and doomed class 76 electrics. Stockport, Crewe and the underrated "Marches" line followed to Shrewsbury and Hereford . Here the photo stop included Father Christmas who no doubt had flagged his reindeer for some quality mileage. Once in South Wales 40028 generated much interest from the locals an uncommon rare beast for them.

Cardiff offered a two and a half hour break for 40028 to be refuelled and the stock watered. Many opted for some "Brains" pubs, others a blast on the "top" Cardiff-Newport corridor with it's many freight and loco hauled services. 33027 on a Crewe-Cardiff, 33065 on a Brighton-Cardiff, 45120 on a Cardiff-Birmingham and 45139 on a Portsmouth-Cardiff were to oblige.

Just after three o'clock 40028 reappeared from Canton and departed on what was to be a memorable journey for many of us. 4 minutes of a wall of sound followed through the Severn Tunnel then Swindon and Didcot West Jn for a crew change at Oxford where we were still just about right time. A saunter through Evesham followed to arrive at Worcester Shrub Hill. Here the quoted Salvation Army band produced for some noisy Christmas Carol renditions. "Jingle Bells" will never sound the same anywhere else! Here also the guy who carried a Christmas tree round with him all day was still much in evidence.

The atmosphere dipped a little during the ascent of the Lickey as we were banked not by 2 massive south Wales's syphons but by 45146! At New St 40028 was replaced by another namer 40034 "Accra" who returned us across the Pennines and on to York in style. Near midnight she ran round to return the ECS to Leeds. We didn't expect as we admired the beast that this would be her last passenger turn. 40034 was withdrawn on Jan 6th just three weeks after the "Christmas Cracker II". Still in high spirits after such a good day a few of us awaited the overnight South. 47428 was our power on a lightly loaded rake of Mk1's here we all drifted off to sleep.

Kings X at nine on a Sunday morning was a world apart from the night before at York and there was much "Humbug" in the air!. We walked to Waterloo where 50047 was power for the 1110 Exeter. At Basingstoke we made the 1200 Reading-Portsmouth with it's booked 33/1 and 4-TC. These trains were only hauled on Sundays and were always something special. 33107 powered us from Basingstoke to Winchester for 33115 back to lonely Michledever, a Sundays only loco hauled haunt. The pub followed before 33108 returned us to Basingstoke for 50005 to Andover on an Exeter. Here condemned 2-BIL and 4 SUB units were the only thing of interest before 50001 returned us to Waterloo. 310055 did the honours in returning me home to end a cracker of a weekend.

15 years later anything seems possible on today's railway, money permitting. Perhaps one day Worcester Shrub Hill will again echo to the sounds of "Jingle Bells" to the background music of a class 40 on tour.

Proceeds from this article will be donated to class 40 preservation.......