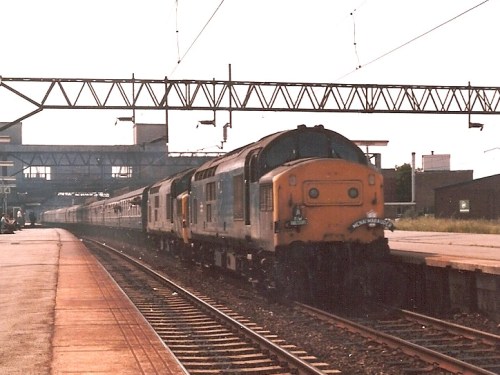 Timings (Booked Only)
(from Paul Griffin)

The timing sheet carries the following comments;
This weekend should see a rather strange coloured Steward Wyatt, who has just returned from Spain after a two week holiday where he fought and gave a lot of Bull. Also this week Steward Rolstone will be giving a demonstration on how to stuff a faggot and how to extract more from a used tea bag. On Sunday, 19th June the BR Adex to Skegness from Taunton was hauled by 37159. On board were a number of F&W Stewards (off duty). Our headboard creator, Mark Alden, was observed capsized on the lake at Skegness on two occasions. Further investigation revealed that the replica class 50 he was carrying was too heavy for the punt! After Steward Edmunds paraded along the promenade in a pair of shorts, the local Constabulary informed us that three Peeping Toms had given themselves up.

Mileage and timings have been delicately put together by 47497 and each sheet hand painted by none other than Dave "Friend of the Whisky Barrons" Parsons.