Notes :
(1) Howard Parker comments: A DMU connecting service ran from Burton on Trent calling at Derby and Long Eaton to Nottingham. Berwick was advertised as an alternative destination. Locos on the Edinburgh to Glasgow Queen St push-pull services were 47702, 47706, 47710 and 47712. The delay at Newcastle on the return was awaiting the guard who was travelling on a late running Liverpool to Newcastle service train. 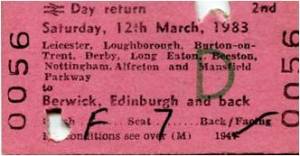 Howard Parker's ticket for the tour.

Source : Howard Parker (on the train throughout)