Notes :
(1) Advertised to traverse the Crewe Independent Lines, but went through the station.
(2) Assisted from rear by 25198 on 2 coach parcels train from Rainhill to Manchester Victoria following vacuum failure.
(3) Train should have gone in to Tinsley, with a class 13 down to Rotherwood then different 76's back, but was running late due to (2) and had to get back over Woodhead before the evening shut down of the line, so train simply taken in to Rotherwood, run round and straight back.
(4) Loco change point originally given as Ashton Jn (Guide Bridge).
(5) Craig Simmons comments: we ground to a halt for 45mins due to the vacuum failure rearing its head again, but this time it was resolved without the aid of an assisting loco. During the protracted wait, whist the train stood pretty much in the middle of nowhere, and with it totally dark outside, one bloke finally snapped and said “that’s it, I’ve had enough” and with that he flung open a door, dropped down to the ballast, and despite the protestations of some of the organisers from the train, vaulted the lineside fence and strode manfully off over a muddy field towards a dimly lit and distant road – how we all cheered, and even more so as the train jolted off only 5mins after his hissy fit and we left him mouthing un-pleasantries in our direction as we vanished in to the darkness). 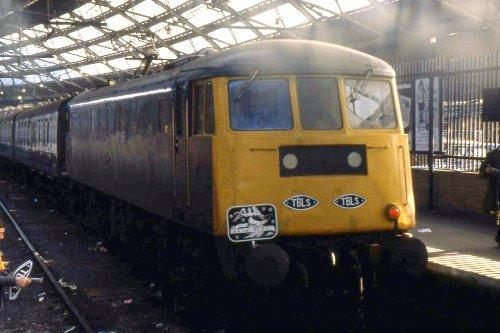 Note: the above photo has been lifted from another Website without permission
as the Webmaster of that Website has ripped information from this Website
and used it on his without crediting SBJ as the source. If that changes then I
will happily seek retrospective permission for its use, else remove it if asked to. 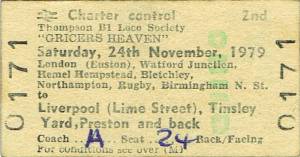 Andy Beaton's ticket for the tour.