Passengers alighted at Malton for the NYMR.

Nick Bircham adds: I was on this trip, which was a bit of a nightmare due to the continuing delays. Firstly 47056 actually had a field divert problem which caused it to stall on the Lickey itself - it was 15mins before the 2x37 banked us! The loco swap was made at Landor St Jct. (46044). The route was as you have, with a crew change at Sheffield. 37034 did take us forward from York 101mins late! 9 road coaches met the train at Malton for those for NYMR - I went on to Scarborough! On the return 37034 waited at Malton for the return of the coaches and arrival at York was 30 late but a defective coach was found and after removal we left behind 46044 67 late! More delay was incurred largely because we travelled via the subsidence infested Pontefract line (not Normanton as outward) . From Sheffield the route was as booked but more time was lost through station o/time whilst stopping at Stapleton Rd and Lawrence Hill, arriving Bristol TM 2355 (100 LATE). Because we were so late engineering works had begun so we were diverted via Westbury to Taunton behind 47124 departing Bristol Temple Meads at 0008 and arriving Taunton 0210!! 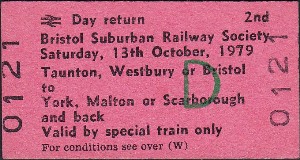