Notes :
(1) Train was delayed for about an hour awaiting a Guard at Stonebridge Park.
(2) 31209 was originally uploaded as 31201 however LASERman and contemporary sources confirm it was in fact 31209 (with the comment that 31201 was spotted that morning at Ferme Park).

Dave Sheppard comments : The train ran late throughout. The timings over the freight lines seemed to have overlooked the existence of the usual low speed limits. Consequently, on return to Newcastle from Morpeth, passengers were offered the option of returning directly to London via East Coast on a service train. Many people, myself included, took this option. Alan Osborn comments: The return to Kings Cross from Newcastle by service train was aboard the 17.57 'Talisman' HST scheduled into Kings Cross at 21.14, however due to a fault on this HST actual arrival was 86 minutes late. The tour train organisers advised eventual arrival into Euston was estimated at 23.40 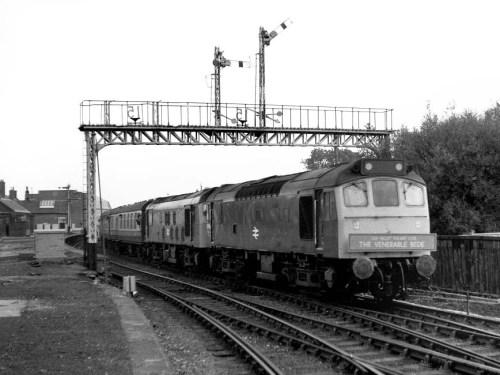