Notes :
(1) Ran in conjunction with Steamtown Carnforth, The A4 Locomotive Society and The Midland and Great Northern Joint Railway Society.
(2) This tour shared (at least) 25138, 86101, 4472 & 4498 with another tour on the same date ('The Comet'), the steam locos being used in the opposite direction on that other tour.
(3) Paul Wright comments: The tour was originally advertised to run direct to Manchester with a pick up at Newton-le-Willows. It was still advertised that way in the August Railway World. By September Railway World it was advertised as running via Crewe with a Runcorn pick up. I travelled on the rail tour joining it at Runcorn. I recorded it as being 15 minutes late but unfortunately did not record the time. The tour ran to Crewe where the AC electric ran around the train. It then ran direct to Manchester Piccadilly. From Manchester Piccadilly the train was hauled by 25 138 to Guide Bridge. At Guide Bridge 4472 took over. There was then a photo stop at Chinley (As per the photo you have by me on the web page). The train then travelled over the Hope Valley route and through Sheffield. Then onwards to York (my memory suggests via Leeds). There was a long stop at York so the NRM could be visited (I did that). The return journey was behind 4498. It was from York to Carnforth via Leeds and Hellifield. There was a stop for water at Hellifield (I have the photos). At Carnforth 4498 was taken off and 86101 put on for the run back to Liverpool via Crewe. 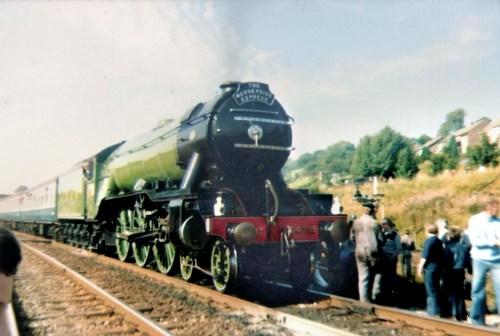