Notes :
(1) Howard Parker comments: Trip was advertised from all the stations 'above' Leicester listed in the timings, but it is not known which were served directly by the excursion and which had connecting services. Totnes was advertised as an alternative destination to Plymouth. To fill in the time at Plymouth, a day return to Liskeard was bought travelling out behind 50026 and return with 47490. On the return 45071 was noted in the sidings at Malago Vale with the stock for the overnight service to Glasgow and Edinburgh, which was 14 coaches including 3 sleepers in each portion. After leaving Bristol on the return, it soon became obvious that the train was taking a different route. It was Bath, Swindon, Foxhall Jn, Oxford, Leamington, Saltley, Water Orton, Whitacre Jn (direct route closed for engineering), Kingsbury Jn, Derby and Leicester, followed by Midland Red bus to Narborough (for me) and subsequently to Hinckley.

Source : Howard Parker (joined the train at Narborough/left at Leicester) 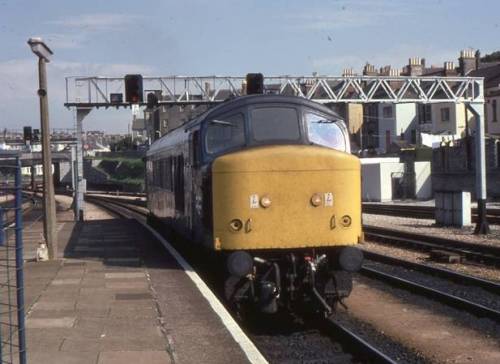 45033 running round on arrival at Plymouth (photo: Howard Parker) 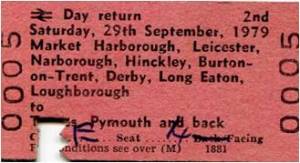 From the Howard Parker Ticket Collection