Notes :
(1) Starting at Euston, it was originally planned to run to Sheffield via Derby, then to be steam hauled Sheffield-Guide Bridge and Chester-Hereford - both legs worked by Clan Line but a fuel crisis meant that diesel mileage had to be restricted thus it was revised as above. Believed to be the first steam working east of Chester since the 1960's.
(2) Brian Basterfield Comments : A tour that was unforgettable for all the wrong reasons. Everything was going along well. A nice run over Woodhead with a pair of class 76 electrics, and no sign of the problems to come. But from the moment that Clan Line pulled out of Sheffield, things went from bad, to worse, then to disastrous. 35028 slipped her way out of Sheffield. And slipped, and slipped, and slipped. By the time we had reached Grindleford, we had already dropped 16 minutes on our 14 minute schedule. And although we reached 67 mph at Bamford, we struggled up through Edale to Cowburn Tunnel at around 25 mph. Thereafter, around the suburbs of south Manchester, it was slow in any case. But by the time we reached our booked stop at Northwich at 3.17pm, we had dropped 27 minutes on schedule. We were booked to take water, but a problem arose. The hose was slow running, and it was 2hrs and 8 minutes later before we had sufficient to proceed. Track restrictions caused more delays to Chester, then adverse signals to Saltney Jn. Then we managed to get going with speeds in the sixties, until a lengthy check awaiting a platform at Shrewsbury, so from Chester another 21 minutes had been lost. Here, a pair of class 25's came on as far as Wolverhampton. Here, I gave up making notes. Possibly an electric came on, but I was too tired to be bothered. 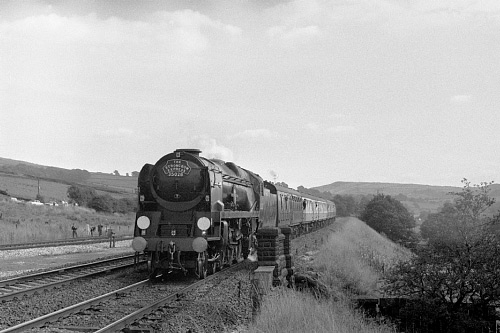