Notes :
(1) Locos not confirmed but if the entry for 26th August (same operator and route) is, as believed, mis-dated and was in fact this trip then the traction was 45064 between London and York and 40119 from York to Scarborough (same locos on return legs). Whilst Jon Wade did not record the locos used he confirms having had 45064 for haulage and seeing 40119 during 1979, both 'rare' classes for him based on his usual locations thus the evidence seems strong that the entry currently uploaded as 26th August is in fact this trip. For the trip currently uploaded as 26th August Keith Hayward comments: I assume the route (same outward and return) to have been MML - Toton - Chesterfield - 'Old Road' - Masborough - Pontefract - York (however confirmation is required).
(2) The following options were available to passengers;
Group 1: leave the train at York for optional sigh-seeing in the city
Group 2: leave the train at York for optional sigh-seeing before joining the Eastern Region special steam-hauled train (scheduled to be hauled by 35028 'Clan Line') for the round trip to Leeds and Harrogate, returning 16:20
Group 3: leave the train at Malton joining coaches for Grosmont station on the North Yorkshire Moors Railway (13:00). There will be time for sight-seeing before travelling on the 13:50 train to Pickering (15:00 - 15:20); returning to Grosmont by 16:25. The coaches then depart immediately for Scarborough.
Group 4: leave the train at Scarborough, joining coaches for Robi Hood's Bay, Whitby and Goathland, where Afternoon Tea will be served at Mallyon Spout Hotel. We return via Hutton-le-Hole to Scarborough.
Group 5: leave the train at Scarborough for optional sigh-seeing.
(3) Jon Wade left the train at York on 'Group 2' which allowed a visit to the NRM followed by joining a circular tour from York hauled by 'Clan Line' and reports 'I think the main train must have been fairly well on time as I had a good opportunity to visit the National Railway Museum after arriving at York (scheduled for 11:23) and before the Clan Line tour'. 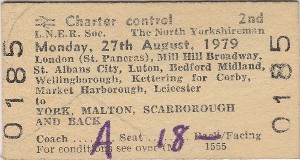 Jon Wade's ticket for the tour.

Timings (Booked Only)
(from Jon Wade)