Notes :
(1) Was booked to run on RNAD lines at Gosport as folows: Bedenham Exchange Siding – Elson Gate - MOD Priddy’s Hard Internal Track – Elson Gate - Bedenham Exchange Siding but did not due to industrial action (see below).
(2) Was booked to run from Model Room Platform to Hythe Frost Lane to enable tour patrons to visit the Hythe Pier Tramway. This was cancelled however due to an administrative error by B.R. A shuttle service was however arranged on the Marchwood Military Port Internal shuttle to the Jetty and back and this was hauled by an MoD diesel (see below for further details).
(3) David Sheppard has provided the following text from the letter given to passengers;
We very much regret that owing to an industrial dispute involving members of the Institution of Professional Civil Servants, the tour train will not be able to proceed onto the R.N.A.D. railway at Gosport today. It will not therefore be necessary for cameras to be collected. We profusely apologise for the disappointment this curtailment of the route may cause; we were only advised of it within the last week, after tickets had been dispatched. It is especially unfortunate that this situation has now arisen for the second successive year. It is now our intention to arrange a short tour incorporating the branch to Elson Gate, to run as soon as it can be arranged after settlement of the dispute. Further suggestions for future tours will be gladly received by the organisers, who may be found in the centre of the train.

Also within the past week, British Railways have advised us that owing to a misunderstanding, Department of Transport clearance for the tour train to run between Marchwood and Hythe has not been obtained. Unfortunately, although this is a straightforward procedure, the omission came to light too late for the necessary authority to be obtained.

However, after considerable efforts, arrangements have been made for a shuttle coach service to operate between Marchwood and Hythe Pier, so that the visit to Hythe Pier Railway can still take place. The coach will leave Marchwood (Port Gate) at 13.45, 14.45 and 15.45. There will be no extra charge for this. Tickets for the Pier Railway visit will specify a coach time; please ensure that you use only the coach at the time shown. Pier Railway tickets will be made available before arrival at Marchwood.

Please note that since the train will not be running to Hythe, it will depart from Marchwood later, viz:-
Marchwood (Port Gate Platform) 17.00d
Marchwood (B.R.) 17.10a 17.25d

Other timings, save for the omission of Elson Gate from the route, are generally as shown on P.6 of the printed itinerary. Notwithstanding the foregoing alterations, I nonetheless hope that you will enjoy the tour. B.W. Rayner 19th July 1979. 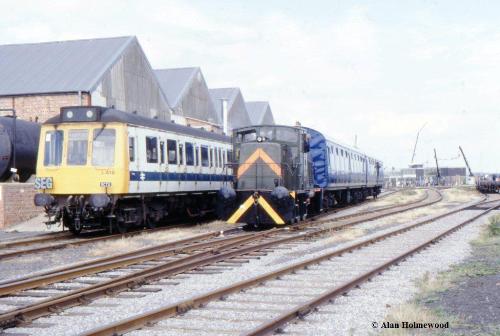