Notes :
(1) These two trains were British Rail InterCity circular tours from York, advertised to run every Sunday from 27th May to 2nd September inclusive. The loco pool for these trips was from 5305, 4498 & 35028 - 5305 being booked to work the trains during June, 4498 in July and 35028 in August.
(2) Gordon Lacy comments: This run with 'Sir Nigel Gresley' proved to be an ideal treat for my son's fourth birthday as he was named after this particular loco! As all steam locos were restricted to 60 mph at that time, there were no spectacular speeds to record. The train was diverted, at Chaloners Whin Jn, onto the Sheffield lines as far as Church Fenton, from where Micklefield bank had to be taken from as low a speed as 22mph. Hitting 36mph, the top was taken at a credible 29mph, impressive, considering the heavy load! 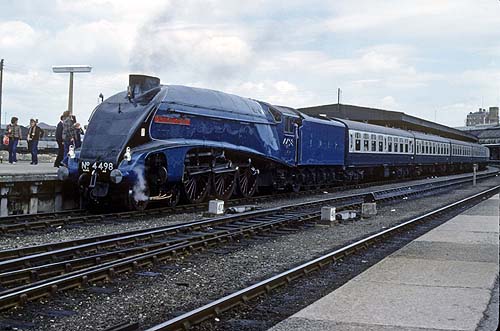