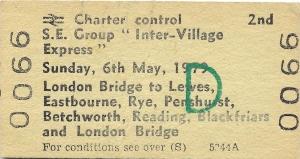 This was a tour to mark the impending withdrawal of the "Tadpoles" from the Tonbridge - Reading line. They were due to be replaced by Western Region DMU's from the start of the Summer 1979 timetable. In practice this only partly happened and "Tadpoles" were still seen on the route as well as other Southern Region DEMU's.

However, back to the tour. After leaving London Bridge it was clear that there was a problem as our climb of Brockley bank got slower and slower. After passing Forest Hill speed did pick up (it's downhill then) and we made it to East Croydon platform 6 (at the time the Reversible line). Eventually 33038 appeared to take us forward on our booked route. The "Crompton" ran round the train in Brighton Top Yard and propelled us into Brighton station, then took us to Hastings via Eastbourne (further run round there).

At Hastings the whole train then disappeared to St. Leonards depot and finally reappeared in the form of 1204 + 1206 without the loco. As far as I can remember the rest of the tour went off without a hitch. We covered the Tonbridge - Reading line then has a sprint up the Great Western main line as far as Old Oak Common where we went up the West London line & reached London Bridge via Blackfriars.

These notes are written in November 2002 so this has been prepared largely from memory.